The Labs That Go Boom: The Center for Defense Chemistry Fingerprints Explosions

How to examine the scene of a crime 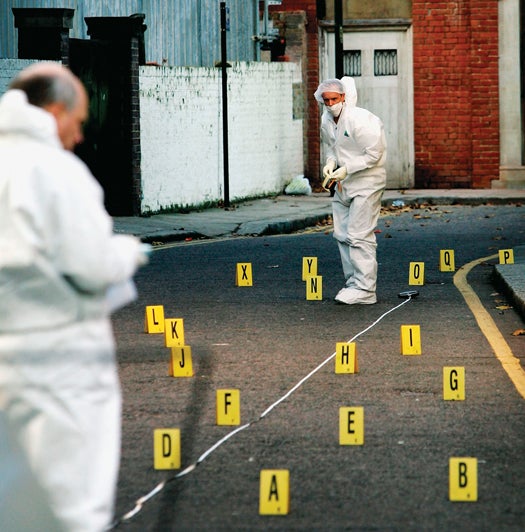 LONDON - NOVEMBER 30: A Police forensic team examine the area around the home of businessman John Monckton on Upper Cheyne Row, where he was apparently stabbed to death at his home, November 30, 2004 in Chelsea, West London, England. Monckton's wife was also severely injured in the attack after two men forced their way into the house at about 7.30pm on November 29, according to reports from Scotland Yard. (Photo by Graeme Robertson/Getty Images). Graeme Robertson
SHARE

Of the hundreds of forensic science programs that currently exist in the U.S. and United Kingdom, only a few train their students to analyze the aftermath of bombings. Undergrads with a science degree may apply to become one of two dozen U.K.-based masters students in Cranfield University’s defense-chemistry department. There, they’ll learn how to lift traces of explosives from debris and uncover the causes of detonation.

To create patches of destruction for students to examine, Cranfield explosives specialists set blasts on the school’s firing range using explosives built on-site, from homemade bombs to military-grade materials. After the blast, students collect mangled fragments of timers, wires and casing, bring them back to the lab, and analyze them using a mass spectrometer. By determining the chemical components of a given residue, students can identify the explosives used in the bomb. Investigators then use that information to identify the weapon’s origin and creator.