For less than $10 million, the team is trying to figure out one of the greatest mysteries in astronomy 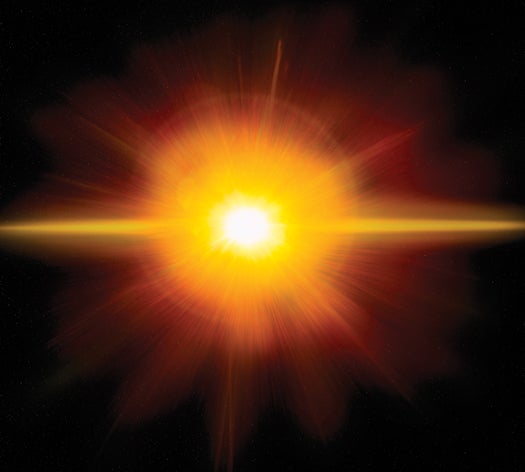 Since 1998, when astronomers discovered that a mysterious force known as dark energy is blowing the universe apart, scientists have launched at least a dozen multimillion-dollar projects to figure out what, exactly, dark energy is. These range from the $71-million BigBOSS project to the $900-million Large Synoptic Survey Telescope, which is scheduled to see first light in 2019. But in an era of shrinking research funding, the advantage might go to scientists who can work on a shoestring budget—people such as Basque cosmologist Narciso “Txitxo” Benítez, who says he can scoop every one of those projects for less than $10 million.

Benítez is a cosmologist at the Institute of Astrophysics of Andalusia in Spain. During his 20-year career, he has published papers on both the most distant known supernova and the closest one, and he was a core member of the ALHAMBRA survey of galaxies. Now, he is on a mission to define dark energy (like hundreds of other astronomers around the world) and has launched a project called J-PAS to do it. 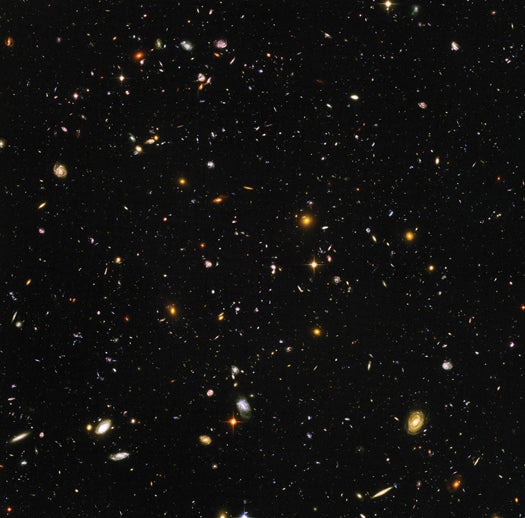 The Hubble Space Telescope took an 11.3-day-long exposure to make this image of galaxies soon after the big bang.

The first step in that long quest is to determine where dark energy is and where it’s been. Astronomers can do that by measuring the location and redshift of millions of galaxies, thereby mapping the universe’s expansion. As galaxies move away from Earth, the light they emit becomes stretched in the direction of the “red” end of the visible light spectrum. The more distant a star, the farther light emitted by that star has traveled through an expanding universe, and thus the more redshifted it will be. If the galaxies in one part of the sky are accelerating away from us more quickly than those in other places, then that part of the sky contains more dark energy.

Benítez is betting that a quick and dirty approach—locating as many galaxies as possible, as fast as possible—will win him the race. It’s a far different strategy from his competitors’. The BigBOSS project, for example, will examine 5,000 galaxies at a time, splitting the light that reaches its telescope into hundreds of individual wavelengths using a prism-like device known as a spectrograph. J-PAS will attempt to study about 60,000 galaxies at a time with a telescope and a 1,300-megapixel digital camera, the second largest in the world. The camera will photograph each swath of the sky 56 times, with 56 different filters, each one isolating different colors. By imaging a fifth of the entire sky, Benítez says he’ll measure the velocities of tens of millions of galaxies, producing enough data to start mapping dark energy by 2018—two years earlier than any of his competitors.

Benítez has about a hundred collaborators, mostly from Spain and Brazil, whose governments are providing most of the funding. Over the past two years, the Spanish government built a new observatory at a site 6,420 feet above sea level in Spain’s Sierra de Javalambre, an arid mountain range, specifically to house J-PAS’s instruments. In June Benítez’s group installed an 80-centimeter test telescope. If all goes well, the main instrument—a 2.5-meter telescope, still small by the standards of big astronomy—will begin imaging galaxies at the end of 2014.

Plenty of things could go wrong. The repetitive imaging process could cause delays. The camera, which Benítez has outsourced to an independent company, could be insufficiently accurate (most are built by academics). Even the observatory’s site could be a problem. Astronomical research typically takes place under the crystalline skies of Hawaii and Northern Chile, which get 300 clear nights a year. The J-PAS site will receive only about 190. As a result, many astronomers are skeptical about the project’s chances. David Schlegel, a lead researcher on BigBOSS, isn’t sure that J-PAS will be able to distinguish between different j-models of dark energy. Others say that Benítez has underestimated the challenges of building a working telescope from scratch. Joshua Frieman, director of the Dark Energy Survey, an ongoing redshift-measuring project, takes a more diplomatic view. “Science advances, in part, by people trying different things,” he says. “In the grand scheme of things, competition is healthy.”

The results of this competition could help predict the fate of the universe. If dark energy has varied throughout space or time, then the accelerating expansion of the universe could be temporary. But if dark energy is constant, the universe will likely keep expanding faster, pushing galaxies farther apart for eternity.