A Mechanical Scale Capable of Weighing a Single Molecule 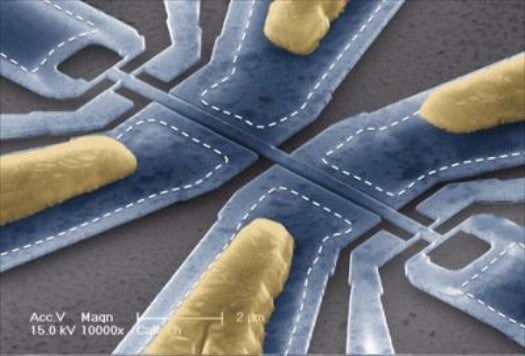 Researchers at Caltech, working with French colleagues, have figured out a mechanical means to weigh the previously un-weigh-able–things like individual molecules, viruses, proteins, and other particles–at the individual level, one by one. Such a scale should lead to huge leaps in understanding of molecular processes within biological cells, as well as advances in nanotechnology and other sciences of the very small.

The device, itself only a few millionths of a meter in size, taps the changes in an oscillating sensor to deduce the mass of individual particles that come in contact with it. Molecules or particles that land on this bridge-like structure alter the oscillation frequency of the sensor in ways that can be measured to determine exactly how much the particle weighs.

This technique isn’t wholly new. Molecules have been weighed previously via mass spectroscopy, where researchers take tens of millions of molecules and ionize them, then use an electromagnetic field to manipulate the newly charged particles in ways that reveal their masses. This works well enough for particles that readily hold charges, but for larger particles and especially those of a biological nature–pathogens, proteins, viruses–that don’t hold a charge well, mass spectroscopy is less than ideal.

A few years ago this same group of researchers demonstrated the ability to weigh individual particles using a vibrational method, but this method also had shortcomings. The shifts in frequencies caused by a particle landing on the sensor bridge is dependent on both the mass of the particle and its position, and the position was difficult to determine. In order to pinpoint a particle’s mass, researchers had to measure hundreds of them and essentially average the results.

The new method allows for individual molecules or particles–even large ones–to be measured one at a time. The motion of oscillation can be described as having several different modes at different frequencies and moving in different directions. One mode could be side to side vibration at one frequency, while the next mode (at a different frequency) moves up and down, and so on. The researchers found that by looking at the way a particle impacts just a couple of these known modes, they could determine the particle’s position on the sensor, filling in that critical unknown in the calculation.

Such a precise scale could allow researchers to look at proteins and other cellular components at resolutions never previously possible, offering huge insights into cellular function and the many pieces of machinery working therein. More immediately, the researchers see their technique underpinning a new generation of diagnostics that allow clinicians to identify various biomarkers in the body based simply on how much they weigh.