The Best Way to Measure Intelligence Could Be Brain Imaging

There are a lot of hurdles to accurately predicting intelligence, from the difficulty of defining exactly what it is to... 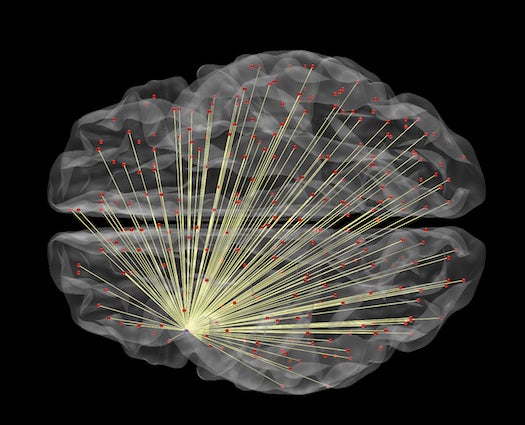 There are a lot of hurdles to accurately predicting intelligence, from the difficulty of defining exactly what it is to accurately understanding the complexities of the human brain. Some techniques are surprisingly simple, like measuring the size of the brain. But others, like a new study that suggests brain imaging could crack the IQ code, require a little more finesse.

Researchers at Washington University in St. Louis found they could determine 10 percent of individual differences in intelligence by determining the strength of neural pathways, specifically those branching out from the left lateral prefrontal cortex to the rest of the brain. That part, their research suggests, acts as a director for the rest of the brain, overseeing how the individual pieces work in tandem and tweaking the process when necessary.

For the study, researchers set participants in fMRI machines, then had them perform tasks designed to measure fluid intelligence, like showing them a series of images and asking if one of them had appeared earlier. The results that came out of the scans allowed them to make individual maps of participants’ “Global Brain Connectivity”–how well those parts of the brain work together.

Objective tests of intelligence are difficult to come by, and even though the researchers say there’s a lot more to learn about how the left lateral prefrontal cortex works, it’s another bit of knowledge about the hunk of gray matter we’re all carrying around.

[Journal of Neuroscience via Washington University in St. Louis]