After Embryo is Washed of Disease, Healthy Purebred Baby Buffalo Born in the Bronx

The first “genetically pure” bison produced from a cleansed and transplanted embryo was born in June, officials at the Bronx... 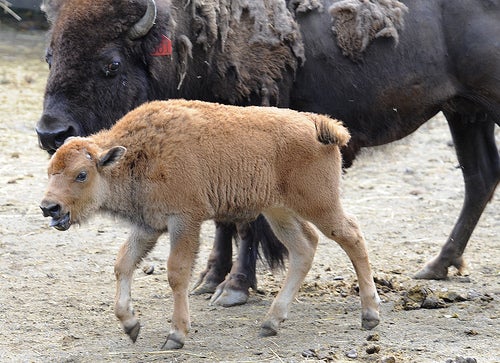 The first “genetically pure” bison produced from a cleansed and transplanted embryo was born in June, officials at the Bronx Zoo announced today. Now the zoo can expand its bison herd with only the purest samples of prairie cows.

Yellowstone National Park has two of the last remaining genetically pure wild bison herds in the nation, which used to roam the continent until humans almost wiped them out by the early 20th century. While most current bison have some cattle genes — a result of interbreeding so western ranchers could make hardier cattle – Yellowstone’s American bison are genetically uninterrupted. But they’re difficult to take out of the park for herd-restoration efforts, because they’re susceptible to catching and spreading a wide range of diseases.

In this new case, researchers were able to take out a purebred developing embryo, wash it clean of disease and implant it into a surrogate commercial buffalo. Unlike the Yellowstone cows, this cow can go wherever veterinarians want to take it. In this case, it was shipped off to the Bronx.

Last fall, Colorado State University reproductive physiologist Dr. Jennifer Barfield and her team took a purebred embryo from a Yellowstone bison cow that lives at an animal health research center in Fort Collins, Colo. (Full disclosure: Your correspondent is an alumna of Colorado State.) Barfield was able to “wash” it so it could not spread diseases like brucellosis, which causes bison to spontaneously miscarry their young. It’s not clear exactly how they washed it (we are awaiting further detail).

After it was deemed clean, Barfield and colleagues implanted it non-surgically into a healthy female buffalo, one with ancestral cattle genes. Then the surrogate mother cow was sent the Bronx Zoo, which has been trying for years to establish a breeding bison herd. The baby male buffalo was born there June 20, but the Bronx Zoo and CSU just announced its birth today, after ensuring it was healthy and normal.

“This illustrates that we can engineer breeding of pure-bred bison to be disease-free despite the diseases that can afflict the bison population at Yellowstone,” Barfield said. It is also a model for mitigating diseases in other types of animals, the team said.

While this research is interesting, it raises a question. CSU’s mascot is the Rocky Mountain bighorn, and our mortal enemy is the University of Colorado and its Buffaloes. Why is CSU announcing this special buff right before the Rocky Mountain Showdown? Maybe because Boulder couldn’t do it?