This has been a sensationally hot summer for America, with records breaking daily. But Greenland seems to have just claimed... 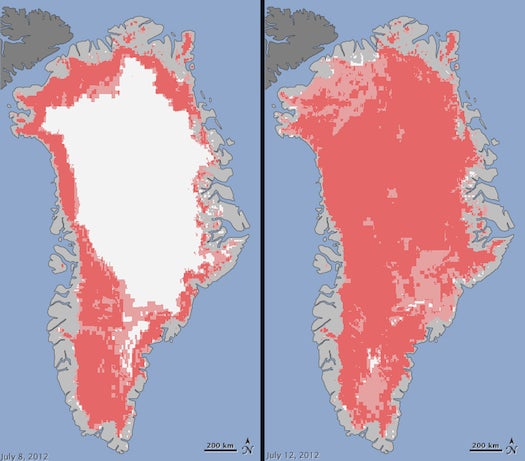 This has been a sensationally hot summer for America, with records breaking daily. But Greenland seems to have just claimed the heat-related phenomenon crown, with 97 percent of its ice sheet turning to slush. The even stranger part? It might be completely normal–at least for now.

The melting isn’t a one-off event; every summer Greenland’s ice melts some amount. But it’s usually about half, and in the 30 years we’ve been keeping a satellite eye on the changes, we haven’t seen anything like this. It was so out of the ordinary, in fact, that scientists from NASA’s Jet Propulsion Laboratory questioned if it was caused by some kind of malfunction. The melt had to be confirmed independently by other climatologists.

By July 8, according to the satellite information, 40 percent was melted. Four days later it was up to 97 percent, and even the area around the highest point of the ice sheet, Summit Station, showed signs of melting. At the same time, a ridge of warm air known as a heat dome was affecting the country, which likely had a lot to do with the melting.

We know from analysis of ice cores that the last time melting like this happened was circa 1889, which, you’d logically think, would mean this was completely unexpected. But it wasn’t. Lora Koenig, a Goddard glaciologist and a member of the research team analyzing the satellite data, said in a statement: “Ice cores from Summit show that melting events of this type occur about once every 150 years on average. With the last one happening in 1889, this event is right on time.”

Researchers don’t know yet if this will contribute to sea levels rising in Greenland, but if it happens again in the next few years, that could threaten the stability of the ice sheet, which would mean major cause for concern.