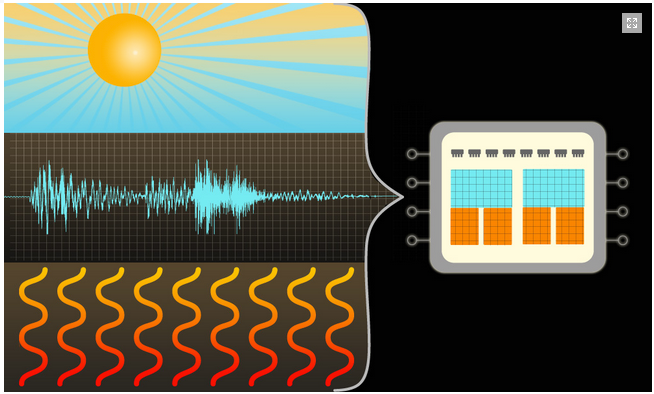 Small power generators that can harvest energy from ambient sources like heat, vibrations, and light hold a lot of promise across a range of applications, particularly in things like remote monitoring. They can harvest the vibrations imparted by vehicles passing over a bridge to power sensors that monitor the bridge’s structural integrity, for instance, or keep a network of wildfire-detecting sensors working in the remote wilderness, no batteries necessary. But these kinds of ambient power are often intermittent and unreliable–unless you can harvest several of them at the same time.

That’s exactly what a new chip developed by researchers at MIT is doing. MIT’s Department of Electrical Engineering has turned out a lot of technology in this space previously, but the frustrations of engineers there are shared by pretty much everyone working in the remote sensing realm: ambient sources of energy, be they the temperature gradients between a body and the outside air or vibrations harvested from machinery or other sources, are typically inconsistent. Sensors or other low-power systems need a steady stream of energy to operate, and energy sources like light and heat fluctuate over time.

To overcome this, the MIT team has created a single device that harvests various environmental sources, smoothing out the inconsistency inherent in any one source. Combining these sources–specifically light, heat, and vibrations–requires a sophisticated control circuit that can efficiently combine the varying voltages produced by each source rather than simply switch among them, as other energy harvesters do. The key innovation here was creating such a circuit that also doesn’t siphon off too much power for its own function.

The MIT system manages to blend all three sources efficiently, storing excess power in a small battery (the chip can power devices either from this battery or directly from the control circuit itself). It could soon be used to power a range of low-power micro-systems that are just now coming to market, such as implantable biosensors or distributed environmental monitoring systems.