What we learned from, and about, our domesticated friends in the last century 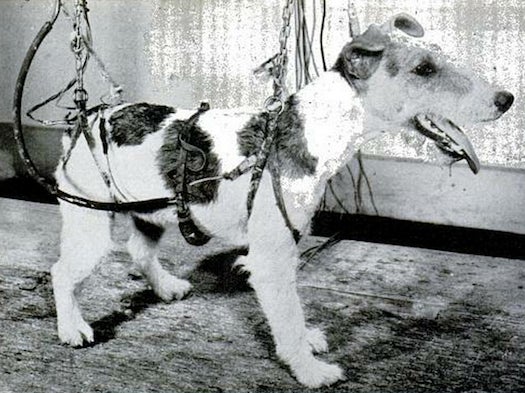 We’ve spent thousands of years living side by side with dogs, and yet we’re still constantly seeing what we can teach them–or, sometimes, it’s them doing the teaching.

So it’s no surprise that Popular Science would keep a steady interest in canines throughout our history, whether that meant using them as subjects in serious experiments or finding oddball uses for them (like having machines for producing arctic dog hair sweaters). Click on the gallery for that and more. 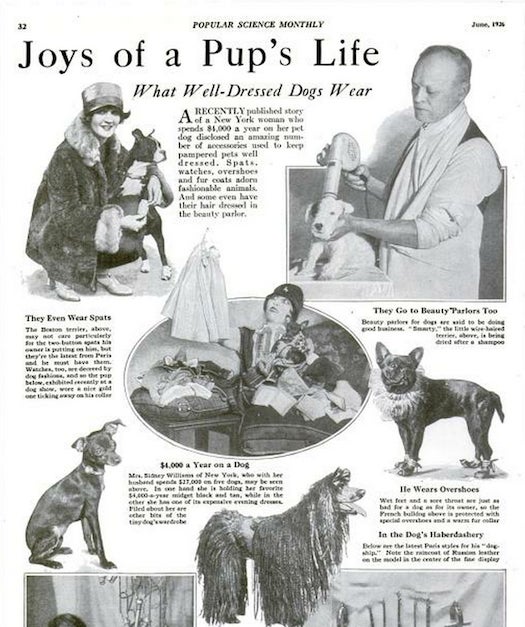 Three years before the Great Depression hit, the Roaring Twenties were still in swing, and even if it’s not all that scientific, a full photo spread of people dressing up their pets at least wasn’t tasteless. Featured in the article were a dog stylist, overshoes for a dog, and a Pekingese getting a perm. From the article “Joys of a Pup’s Life.” 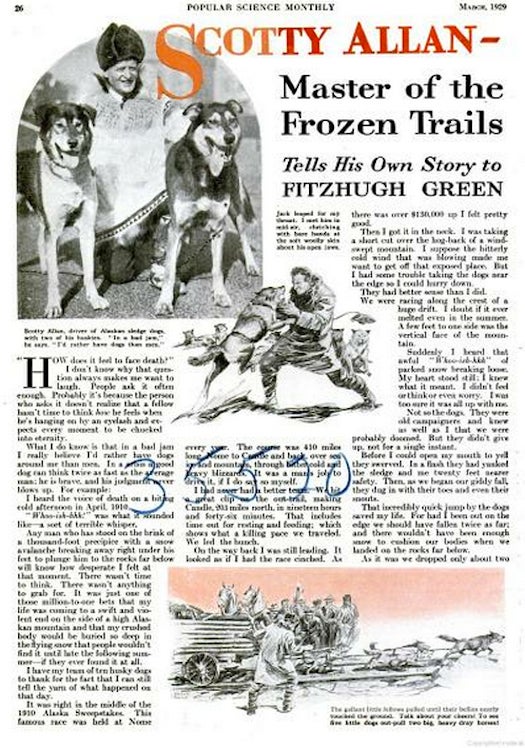 Scotty Allan built a reputation for himself as one of the greatest mushers of his day, and here, in his own words, he tells the story of his faith in sleigh dogs. You have to love the over-the-top machismo it starts with: “‘How does it feel to face death?’ I don’t know why that questions always makes me want to laugh.'” He goes on to explain how he’d much rather have a dog at his side than a human when he hears “the voice of death on a biting cold afternoon.” From the article “Scotty Allan–Master of the Frozen Trails.” 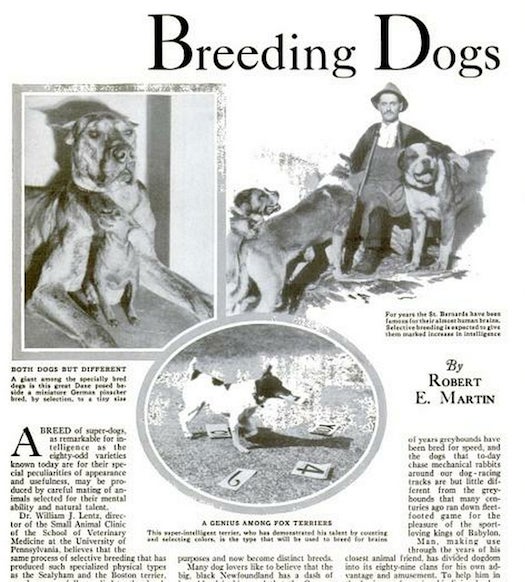 The language from this article isn’t tepid; they really do repeatedly say “super-dogs.” Selective breeding was a relatively new idea, but breeding dogs that were wildly intelligent–“as to rank in the Brain Trust of the canine world”–was positively cutting edge. The puppy in the center of the article looks like it could’ve been taken from a still of “The Little Rascals,” but it’s actually billed as one of the select few that’s smart enough to breed. There’s also some good history on how different breeds came to be, although the English bulldog gets derided as a manmade “monstrosity.” Ouch. From the article “Breeding Dogs for Brains.” 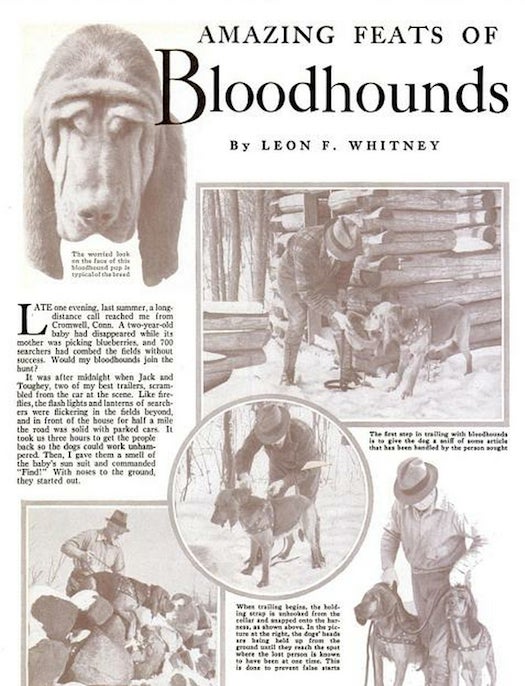 Author Leon F. Whitney tells of his experience with bloodhounds–specifically, why they’re so good at tracking, and how many people he’s helped track down. (He seems to live in some kind of neighborhood where this is requested on a weekly basis.) The part you don’t see in a movie search-and-rescue scene is the training. One idea is to have a child rub liver on his hands then let the dog pick him out of a group. From the article “Amazing Feats of Bloodhounds.” 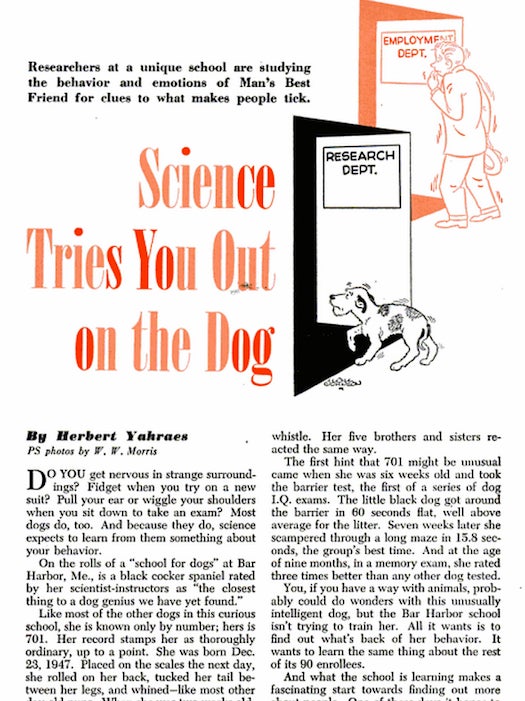 Want to learn something about people? Start by studying (really smart) dogs. A lab proposed this as a way to determine why one person ended up “a Milquetoast and another a bully.” “They chose to work with dogs,” we say, “because, as you’ve probably noticed, they act a lot like human beings.” (Not sure I would conduct scientific experiments based on how similar we are, but OK.) By seeing how exposing one to different situations during its development, researchers tried to determine how it would behave later in life. A brother and sister dog, for example, could act much differently than expected based on how they were treated growing up. One test involved regularly yelling at the dog while brandishing a yardstick. Surprise! That could make you timid. From the article “Science Tries You Out on the Dog.” 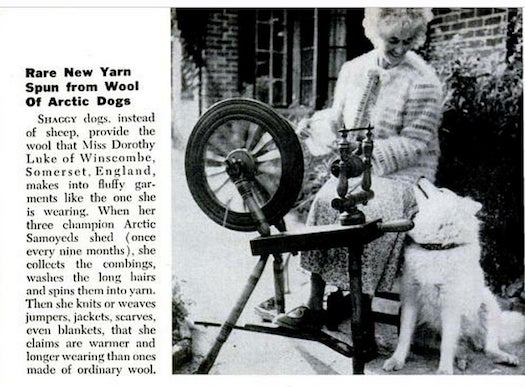 Miss Dorothy Luke of Somerset, England, seems a little kooky. She used dog hair to make clothes, like the incredibly uncomfortable-looking sweater she’s wearing. It never caught on, of course, but maybe she was right and we’re sitting in front of a completely untapped resource. From the article “Rare New Yarn Spun From Wool of Arctic Dogs.” 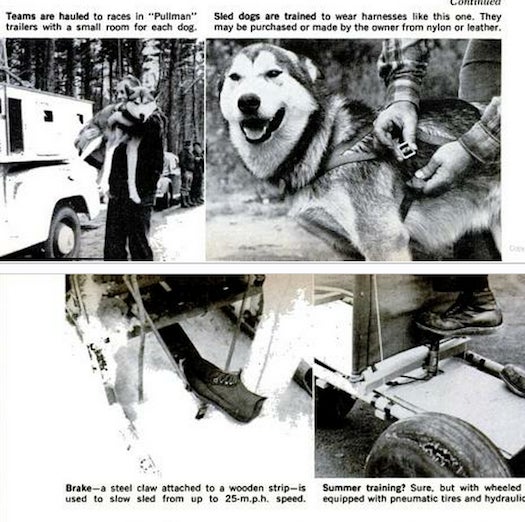 Dogsledding on the Rise, February 1967

We may have been a little hasty in this article, subtly proclaiming that dogsledding was making a comeback. But who could blame us? As we say, it was getting popular, even in the Southwest, and had three dozen “thriving clubs, one of which boasts 2,800 members.” We taught you everything you needed before you gave the sport a go–but if you didn’t end up having anyone to race with, we apologize. From the article “Dogsled Derby: Hills, Chills, Spills, Thrills.” 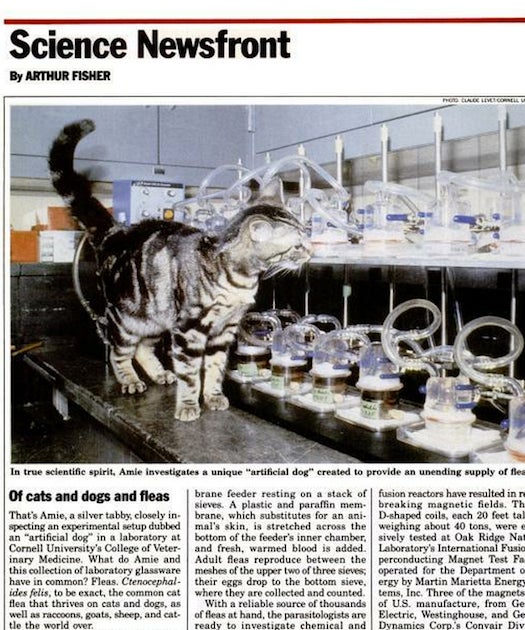 Scientists at Cornell University created the first “artificial dog”! Sound fun? It’s not, actually. It’s just kind of gross. Scientists developed the dog–which is actually a plastic and paraffin membrane placed over warm, fresh blood–as a way to reliably reproduce and capture fleas. And it worked, with thanks from the cat pictured and test dogs all over the world. From the article “Of Cats and Dogs and Fleas.” 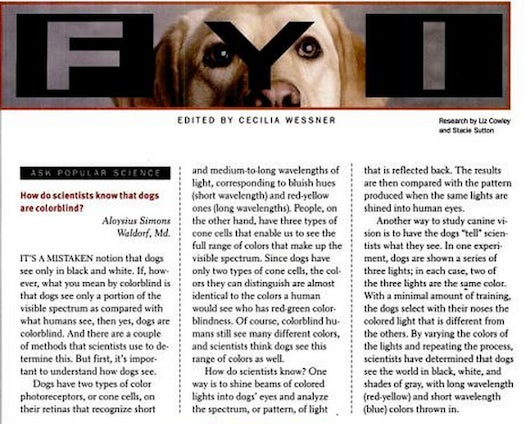 PopSci‘s FYI section did some mythbusting in 1999 after a reader asked how scientists knew dogs were colorblind. Just so you know: they don’t see in black and white, just in a smaller portion of the visible spectrum than humans. A good process for finding out what dogs can see is to just ask them. Running experiments where dogs are trained to find colors allows scientists to understand what they can and can’t determine. From the article “FYI: How Do Scientists Know that Dogs Are Colorblind?” 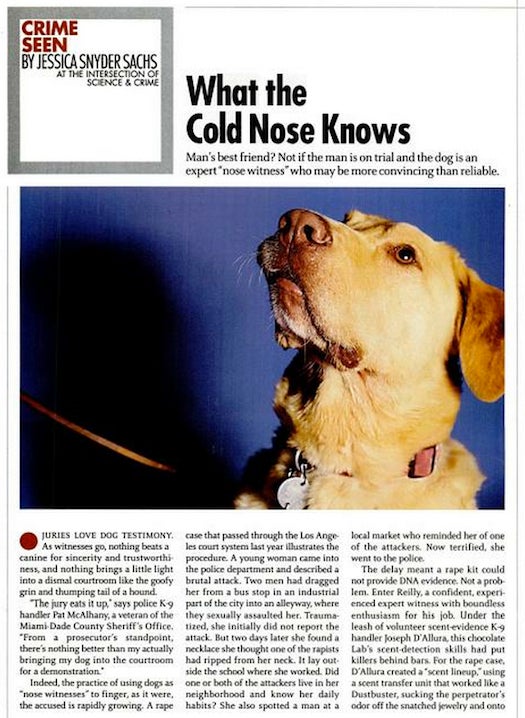 Prosecutors, we explained in this 2003 article, loved using dogs as so-called “nose witnesses.” They’re cute, and bring some life to dreary court proceedings. But how accurate are the sniff tests used to determine the guilt or innocence of a person? Some researchers had doubts, and as they point out, there’s no way to get the dog’s response when asking, “Are you sure?” From the article “What the Cold Nose Knows.”
Animals
archive gallery
archives
dogs
future then