One of the primary obstacles to human colonization of Mars is the funding — creating a habitable environment and sending... 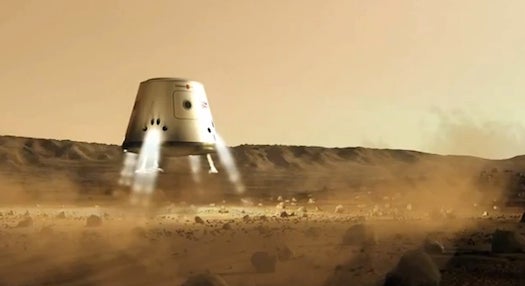 One of the primary obstacles to human colonization of Mars is the funding — creating a habitable environment and sending humans across the gulf of space is a costly process, well beyond the exploration budgets of most nations. But Nobel Prize-winning physicist Gerard ‘t Hooft and Big Brother co-creator Paul Romer have a brilliant solution that will put colonists on Mars by 2023.

The key: Fund the whole shebang by turning the mission into reality TV.

The Dutch company Mars One is managing the project, and in its explanatory video below, talking heads call the project (a little euphemistically maybe) a “media event,” comparing it to the moon landing. They also tout the fact that its apolitical and taxpayer-independent, a private space endeavor, paid for by eyeballs on screens.

The entire world will be able to watch and help with decisions as the teams of settlers are selected, follow their extensive training and preparation for the mission and of course observe their settling on Mars once arrived. The emigrated astronauts will share their experiences with us as they build their new home, conduct experiments and explore Mars.

The part of that quote that sticks out is that an audience will be able to “help with decisions.” Shifting the selection process from experts handpicking the best candidates to, perhaps, people texting in to vote for their favorite explorer is an … interesting idea.

Four explorers would hit the surface of the Red Planet by 2023 — where, the company promises, a habitation will already have been built — with more trickling in over the next 10 years until 20 people are there. Construction rovers would be sent first to make sure housing is set up for the first wave, with more houses going up as needed.

Mars One has received letters of interest from aerospace companies potentially willing to donate hardware for the mission, and the presence of some real scientists rather than businessmen lends credence to the project, but colonizers on Mars in a little more than two decades is still a lofty goal, whether it’s funded by NASA or by prime-time.