The ability to heal–to repair oneself repeatedly and thus sustain damage repeatedly–is one of biology’s greatest tricks, and one that... 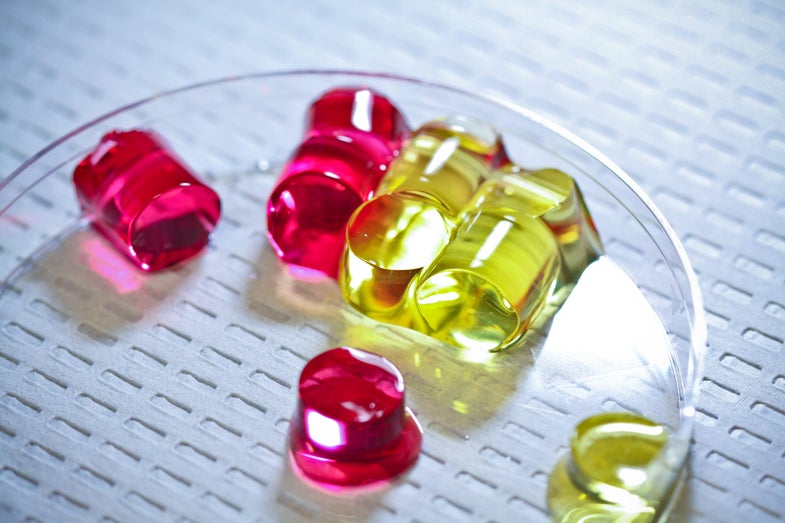 The ability to heal–to repair oneself repeatedly and thus sustain damage repeatedly–is one of biology’s greatest tricks, and one that humans have been trying to replicate in synthetic materials for years. Now, bioengineers at University of California, San Diego, have done so via a hydrogel that could be something of a game-changer in disciplines like medicine and materials science.

Hydrogels are semi-solid, gummy-bear-like squishy materials made of chains of hydrophilic polymer molecules. That hydrophilic quality makes them a good analog for natural tissues because, due to their high water content, they tend to mimic the flexibility and other textural qualities of biological media. As such, they are often used in medical applications–as scaffolds for tissue engineering, for instance, or as drug delivery systems–but thus far attempts to make them repair themselves after a cut or tear is introduced have come up short.

The UCSD team found that the key to making hydrogels self-heal was creating a means by which polymer chains that have been cut can find and latch onto each other. Then they set to work making it happen via mechanisms they call “dangling side chain” molecules, which are pretty much exactly what they sound like. Like fingers hanging from the main structure of the polymer chains, they give a chain that’s been damaged something to grab on to. Through computer simulations, the team found that the length of these dangling side chains plays a crucial role in the ability to self-heal, and that by optimizing this length they could make a hydrogel with a surprisingly strong ability for self-repair.

Further, the strength of the bond established when one of the hydrogels self-heals can be manipulated by the pH level of a surrounding solution. So, for instance, in an environment with low pH the hydrogel fuses rather strongly, while at higher pH levels the bond is weakened. That characteristic makes it ideal for working in applications where acid is present, whether that’s suturing up a perforated stomach or creating a protective lining for containers that hold caustic, acidic materials.

Of course, that only makes sense for the particular hydrogel the team has in the lab now. Next, the bioengineers hope to create a variety of hydrogels that fuse and separate at different pH values, widening their applications to environments that aren’t necessarily acidic. Such hydrogels could potentially lead to a new generation of self-healing plastics and other synthetic materials that can sustain and bounce back from repeated damage, just like the human body.