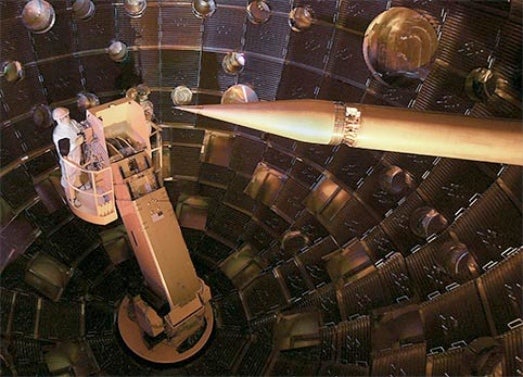 The National Ignition Facility at Lawrence Livermore National Lab designed its super laser to fire powerful laser shots at intensities up to 1.8 megajoules, but researchers aren’t stopping there. This week the NIF combined 192 lasers to fire a single 1.875-megajoule shot into a test chamber, and by the time it passed through its final focusing lens the shot had reached 2.03 megajoules, setting a new record for ultraviolet lasers.

That’s significant for a couple of reasons. Firstly, the NIF is now home to the world’s first 2-megajoule UV laser. In and of itself, that’s remarkable. But it also proved that it can surpass its own 1.8-megajoule design parameters without, you know, melting down or exploding or whatever super-powerful lasers do when they test to failure. This allowed it to fire a second shot just a day and a half later, another significant feat.

Why? Researchers eventually want this kind of laser to be able to fire off high-powered shots at 15 per second. That kind of performance is still a ways off, but once achieved it could open the door to nuclear fusion with a net energy gain. A powerful enough–and fast enough–laser could generate and sustain a fusion reaction by imploding hydrogen isotope pellets inside a fusion reactor in such a way that more energy comes out than goes in.

Again, that’s a long ways off. We haven’t reached the break-even point or even the ignition point necessary to produce a fusion reaction. But we’re getting there. Eighteen months ago the laser had created just one percent of the conditions researchers think necessary for ignition. That’s now jumped by ten percent, mostly in recent months as the effort has picked up steam. The laser could satisfy the requirements for ignition in the next six months, researchers say. So even though we’re a long ways off, we’re getting there.