For the First Time, a Message Sent With Neutrinos

Straight through 780 feet of rock 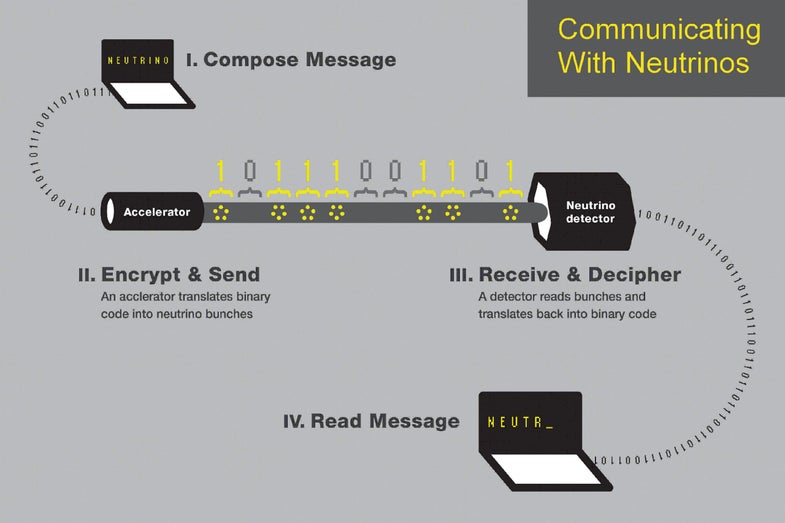 In a major step for truly wireless communications, scientists have figured out how to send a message with neutrinos, transmitting a single word through 780 feet of bedrock and translating it at the other end. It’s just a first step, but the message suggests that someday, submarine crews and maybe average civilians will communicate by sending chargeless, ghostly particles through any obstacle. The message? “Neutrino.”

Maybe researchers from the University of Rochester and North Carolina State University could have come up with a more interesting or ominous word, but their breakthrough is pretty impressive. Using neutrinos, you could theoretically communicate between any two points without any cables or wires — through water, which is what makes them an attractive option for marine applications, or even through the entire planet. Chargeless and tiny, neutrinos are unperturbed by obstacles the way radio waves are.

The neutrino message was produced at Fermilab, using one of the institution’s particle accelerators to produce a high-energy neutrino beam and then using the MINERvA detector, located in a subterranean cave, to read them. The research team translated the word “neutrino” into binary code, and fired large groups of neutrinos to ensure the detector would pick them up.

Neutrinos are incredibly hard to detect, so finding them requires enormous networks of equipment. Even with a multi-ton detector like MINERvA, only about one in 10 billion neutrinos is spotted. After MINERvA detected them, the binary signal was translated back into English, and the word “neutrino” was received loud and clear.

Using a particle accelerator and massive detector to send a single word is not exactly a practical communication system, but the fact that it worked suggests there’s ample room for further study. The researchers submitted their work to the journal Modern Physics Letters A.