It’s long been known that birds have a sense for the Earth’s magnetic field and can use it to aid... 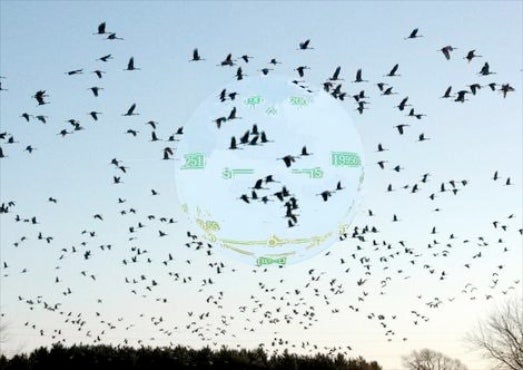 It’s long been known that birds have a sense for the Earth’s magnetic field and can use it to aid in navigating their long migratory routes across the continents, but researchers at Oxford University and the National University of Singapore think their innate navigation tools are even cooler than once supposed. A new study shows that birds may actually see that magnetic field. In other words, birds have a natural head-up display akin to that used in fighter jets and other aircraft that overlays information on their fields of vision.

That’s the kind of evolutionary trick that’s truly amazing. As worded in an Oxford press release: “According to the new model, when a photon of light from the Sun is absorbed by a special molecule in the bird’s eye, it can cause an electron to be kicked from its normal state into an alternative location a few nanometres away. Until the electron eventually relaxes back, it creates an ‘electric dipole field’ which can augment the bird’s vision – for example altering colours or brightness.”

There are many of these molecules with many orientations spread throughout the eye, the researchers presume, so as the bird moves its head the patterns in its field of vision shift, offering crucial information about the Earth’s magnetic field and navigational direction.

The researchers also note that while this sounds like some kind of higher vision mechanism, it’s really the kind of thing that could evolve quite easily. It doesn’t require the development of some new sensory organ but rather just piggybacks on normal vision. If some birds developed this trait via genetic mutation or some other avenue, it would give them a distinct evolutionary advantage over their peers when it comes to migration. And it wouldn’t take long, in evolutionary terms, for something like this to manifest itself across populations.

Further study is of course needed to verify if this model for avian vision is correct. Regardless, the fact that it might be is pretty cool to think about.