Back in the day of the first mammals, horses started out the size of house cats, weighing about 8 pounds … Continued 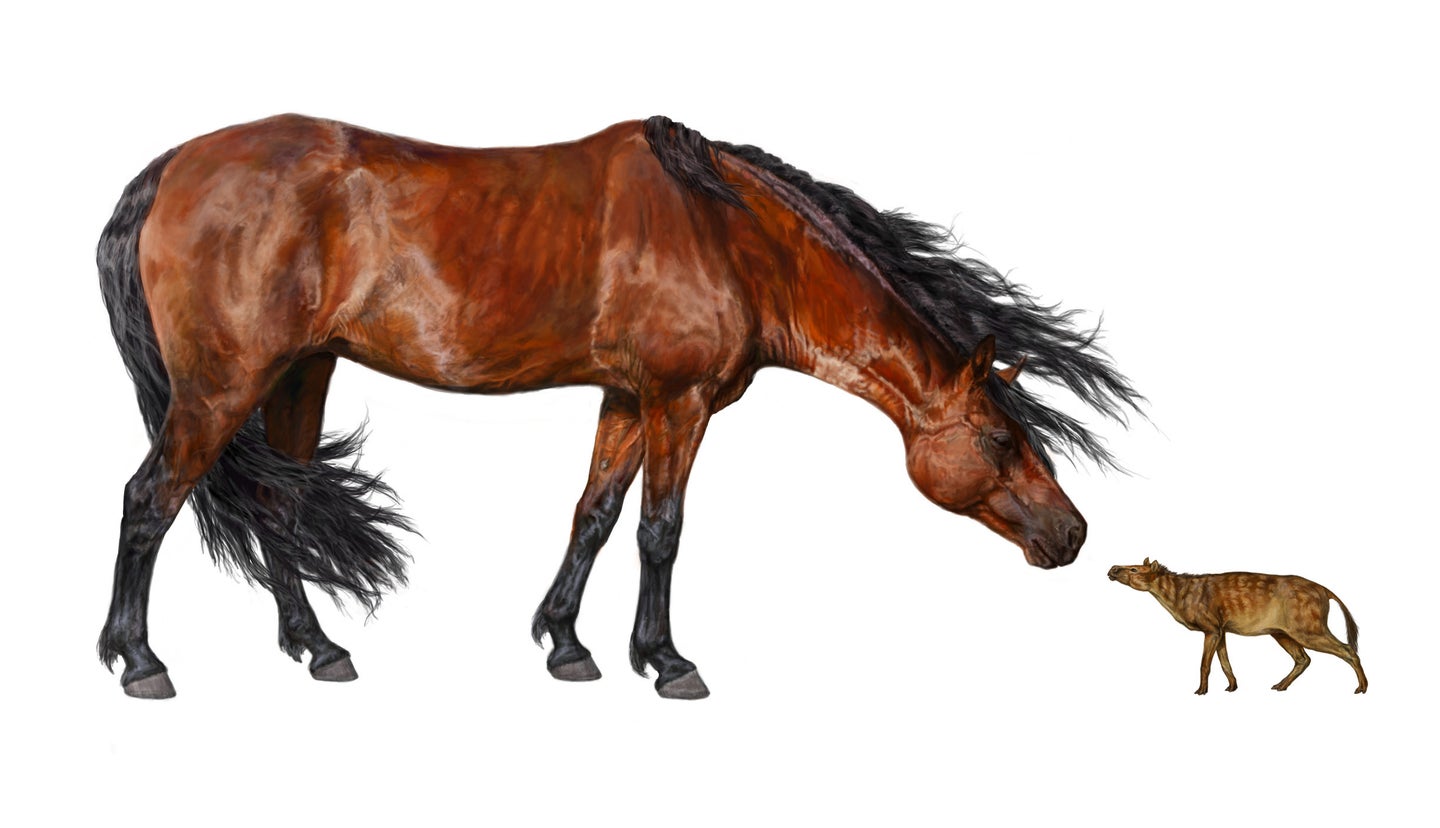 Back in the day of the first mammals, horses started out the size of house cats, weighing about 8 pounds and standing only a few inches tall. Then they got even littler, a direct result of the warm temperatures that characterized the Eocene era. Only when Earth cooled down a bit did the beasts get big, according to a new study — the first evidence that temperature directly affects body size. Interesting results when you think about rising global temperatures. Are Earth’s animals about to undergo a New Shrinkening?

In about three-quarters of mammals, a truism called Bergmann’s rule holds that animals are smaller in hot climates and bigger in cold climates. Think about wooly mammoths versus Madagascan tenrecs. But a debate persists about why this is so, and whether it’s because of temperature itself or because of indirect results, like food abundance and conservation of heat energy. Ross Secord and colleagues set out to answer this question by studying horses from now and in the past.

About 56 million years ago, the Earth warmed up during a phase known as the Paleocene-Eocene Thermal Maximum, or PETM. Carbon dioxide increased and global average temperatures rose by about 5 to 10 degrees Celsius. At least in horses, body sizes went down as temperature went up.

The little horse in the picture above is called Sifrhippus sandrae, and he is the earliest known horse. The species probably came to North America and Europe from a high-latitude land bridge that opened during the warming phase. After its arrival, its body size shrank by 30 percent over the next 130,000 years, Secord and colleagues say.

They considered the dryness of environments, atmospheric pressure and even the nutritional content of plants exposed to higher levels of carbon dioxide, and ultimately conclude that temperature was the primary driver of size evolution in Sifrhippus. Their paper appears today in Science.

So does this mean that global warming will make us all smaller? Taken to its furthest extent, this hypothesis sounds like some sort of Malthusian dream. Smaller humans would likely require less food. That means we would require less land on which to grow the food. Then we would use less fertilizer, and we’d need fewer factories to make fewer tractors to plow the fields on which we harvest the smaller amounts of food. Fewer factories=less energy requirements=fewer carbon dioxide emissions=less global warming?

Sound crazy? Maybe, but I’m not the first person to say this. Philip Gingerich, a researcher at the University of Michigan who first noticed decreasing body size during the PETM, said he jokes about this all the time.

“We’re going to be walking around 3 feet tall if we keep going the way we’re going,” he said. “Maybe that’s not all bad and if that’s the worst it gets, it will be fine. You can either adapt, or you go extinct, or you can move, and there’s not a lot of place to move anymore, so I think it’s a matter of adaptation and becoming smaller.”

Like NASA’s new cloud-cooling study, this vision of the future is an almost poetic example of nature taking its course in spite of us. Things really do want to even out in the end.