Hearing sounds smaller than any we've ever heard before 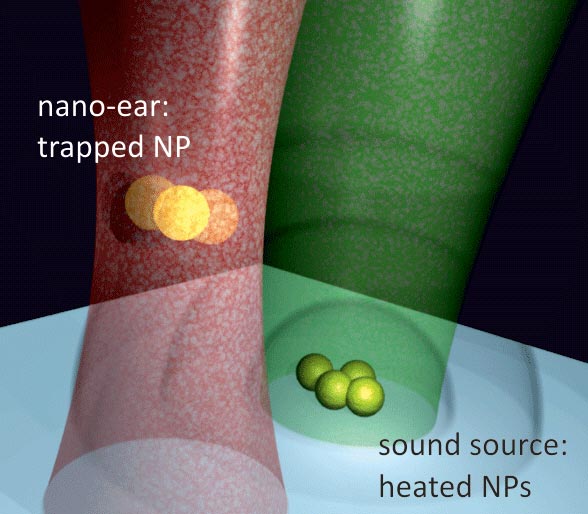 German researchers have turned an optical tweezer device into the world’s first “nano-ear” capable of detecting sounds six orders of magnitude below the threshold of human hearing. Using an optically trapped gold nanoparticle as their listening device, the team says they can now detect sounds made at the bacterial level or use their device to tune (or perhaps to test?) the minuscule MEMS machines of the future.

The nano-ear is pretty simple, considering that it relies on technology that has been laying around in the lab for decades now. Optical tweezers are laser devices that use light to trap or manipulate a small particle in a particular point in space by drawing the particle to the most intense point in the laser beam’s electric field. By trapping a gold nanoparticle in just such a optical trap and measuring the influence of various sound waves on that particle, the found that they can “listen” to very small vibrations.

That means sound analysis at extremely low levels. The gold nanoparticle itself is just 60 nanometers (that’s 60 billionths of a meter, or roughly a thousand times smaller than a human hair), which makes it pretty sensitive to very small forces. The researchers used both a “loud” source–a tungsten needle glued to a speaker that vibrates at roughly 300 Hz–and a second source made up of bunches of other gold nanoparticles heated by a second laser to vibrate at just 20 Hz.

The nano-ear could hear them both loud and clear. The sound waves nudge the trapped gold nanoparticle in the same direction that the waves are propagating, allowing for precise measurement of the sound itself based on the particle’s motion. Experiments showed the nano-ear could detect vibrations down to about -60 decibels–or six orders of magnitude lower than human hears can. That means the device could be used to identify microorganisms or processes at the microscopic level by their sound signatures, or to help design and tune microelectrical mechanical systems.