The LHC Has Discovered Its First New Particle

And no, it's not the Higgs boson 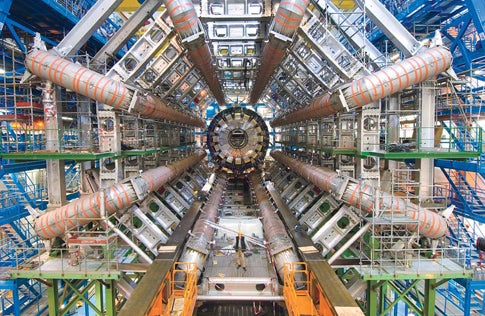 Though researchers think the Higgs boson is running out of places to hide, the LHC has yet to provide conclusive proof of its existence. But the ATLAS experiment at the LHC–one of the two main experiments taking precise measurements of particle collisions–has found what is thought to be the first observation of a new particle at the world’s largest science experiment. Known as cb(3P)–or Chi-b (3P)–observations of the particle should yield new insights into the strong force that holds atomic nuclei together.

The cb(3P) particle is a newly observed means of combing what’s known as a beauty quark with its antiquark equivalent. It’s considered a boson like the Higgs, and like the Higgs it has long been thought to be there, theoretically speaking. It’s a more excited state of Chi particles already witnessed in previous collider experiments. But no one had actually seen it until now.

The as-yet unpublished research should be a jumping off point toward a greater understanding of what holds the universe together. The Higgs gets a lot of air time, as it has proven the most elusive of the Standard Model puzzle pieces and is thought to be the particle that gives all others mass. But once a theory establishes how the universe got mass, it still has to demonstrate how that mass is held together at the fundamental level. That means understanding the strong force and the roles of particles like cb(3P).

Geek out on some hard physics over at arXiv.