A Significant Portion of Mars Could Be Friendly to Life, New Models Suggest

Now that we have slam-dunk evidence that Mars was once a wet and likely temperate place, astrobiologists are pondering the... 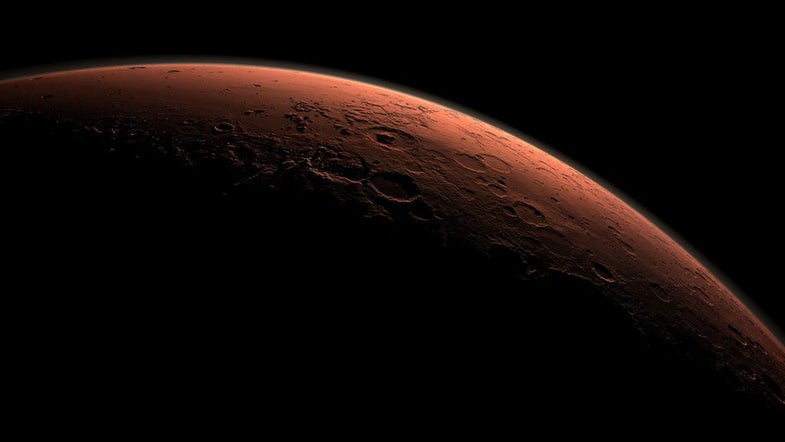 Now that we have slam-dunk evidence that Mars was once a wet and likely temperate place, astrobiologists are pondering the implications for ancient Martian life. One new study says the Red Planet has even more habitable space than Earth — albeit underground.

Led by Charley Lineweaver at the Australian National University, researchers compared models of temperature and pressure conditions on Earth with those on Mars, extrapolating how much of Mars might be amenable to hosting Earth-like organisms. Life occupies just one percent of Earth, if you consider the entire planet’s volume from the core to the stratosphere. But apparently three percent of Mars could be habitable, Lineweaver said. Most of this comfortable space is underground, where there would be sufficient pressure and warmth to hold liquid water and perhaps some toasty microbes.

Although the Phoenix lander found ice at the north pole, modern Mars’ surface is too low-pressure to hold on to liquid water, and it’s too cold (average about -81 °F) for water or life as we know it. But nestled underneath the planet’s crust, the habitat could be much more friendly, Lineweaver told AFP.

Lineweaver said his study uses decades of data from a host of Mars missions and compiles information about several sites, rather than just one or two areas. “There are large regions of Mars that are compatible with terrestrial life,” he said.

The Mars Science Laboratory, en route to the planet for an August arrival, is designed to help answer some of these questions. It has several instruments for examining the chemical composition of rocks inside Gale Crater, a region believed to once host flowing water. The Curiosity rover also has some instruments designed to look for the chemical ingredients of life.

The Australian study was published in the journal Astrobiology.