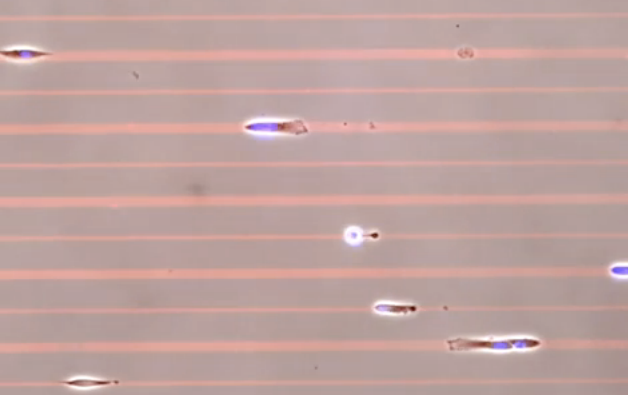 A clump of bone marrow cells are the fastest cells in the world, moving at a glacial pace of 5.2 microns per minute across a petri dish. They beat a line of breast cells by a hair’s breadth — OK, well less than that, because the entire race track was about a hair’s breadth long.

The race results were announced at the annual meeting of the American Society for Cell Biology, who arguably have the most fun of any scientific society out there. But this competition, hosted in labs around the world, did serve the larger scientific purpose of studying how cells move.

Cell mobility underlies some of the most complex biological processes, from embryo development to cancer metastasis, and cell biologists could use the “race” to compare the relative motility of different types of cells. Apparently stem cells and cancer cells move with a quickness, at least relative to differentiated and healthy ones, according to Nature News.

Over the summer, competitors shipped their cell lines to labs in Boston, London, Heidelberg, Paris, San Francisco, and Singapore, where they were thawed and placed in specially designed well plates containing cell race tracks, according to the competition rules. The tracks were actually 400-micron micropatterned plates that were coated with fibronectin tracks to attract the cells, and surrounded by material that repels them. The cell nuclei were stained so that digital cameras could watch them move for the next 24 hours, monitoring their progress across the official race distance — about 100 µm, or about the width of a human hair. The first ones to reach the end of the track were the winners. The camera images were stitched together into time-lapse videos.

Unusual cell types were welcome, and “genetic modifications [were] allowed and even encouraged,” according to the official rules. The competition wrapped up in July, but the winners were announced over the weekend.

Top honors went to fetal mesenchymal bone marrow cells from Yuchun Liu at the University of Singapore, Nature News says. Second place went to a line of unaltered breast epithelial cells, at 3.2 microns per minute, and third went to the same cell type that had been tweaked to behave like cancerous cells, at 2.7 microns per minute. The winning biologists received Nikon digital cameras and some lab equipment.