One of the most controversial science stories in recent memory, the saga of arsenic-loving microbes, resurfaced again this week, a... 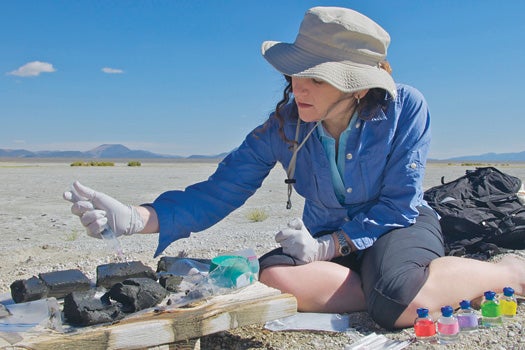 One of the most controversial science stories in recent memory, the saga of arsenic-loving microbes, resurfaced again this week, a year after the initial claims created a media firestorm. Now scientists at the University of Illinois-Chicago have sequenced the genome of the disputed bug, a step toward comparing its genetic predisposition (or lack thereof) to surviving incorporation of a toxic chemical.

Simon Silver, a microbiologist at UIC, published the genome of the bacterium known as GFAJ-1, named for Felisa Wolfe-Simon, the scientist who discovered it in a salty California lake. (GFAJ stands for “Give Felisa A Job.”) The research team found 3,400 genes in the bug’s 3.5 million bases, Simon said. It is available here at Genbank.

The genome won’t solve the controversy of whether this microbe actually substituted arsenic for phosphorus in its DNA, but it’s a step toward understanding how the bug works, and possibly how it survived in such an arsenic-rich environment.

GFAJ-1 burst onto the scene last December, with NASA proclaiming it held major implications for astrobiology. The microbe lives in a highly alkaline, hyper-saline and arsenic-laden eastern California lake called Mono Lake. Wolfe-Simon and research colleagues took it into the lab and simulated the lake environment, then diluted the natural phosphorus. Wolfe-Simon hypothesized that arsenic, typically toxic to life, could stand as a proxy for phosphorus, itself one of the six main ingredients necessary for life. The elements are similar in atomic structure, and there are a couple other examples of chemical substitution elsewhere in the kingdoms of life. After several rounds of experiments, and using several types of molecular analysis, Wolfe-Simon et al said the microbe successfully substituted arsenic for phosphorus and not only survived, but thrived.

Days after the journal Science published these results, the scientific community (and blogosphere) erupted, with several other biologists finding major faults with Wolfe-Simon’s analysis. Click here for our previous coverage online and here in the magazine.

Five months later, Science also published a list of concerns addressing the team’s findings and methods. Meanwhile, at least one skeptic, Rosie Redfield, has been trying to replicate the results.

Now Silver and his colleagues sequenced the bug’s genome, hoping to shed further light on its makeup. They plan to compare GFAJ’s genome with three others from other microbes living in arsenic-rich environments, according to Science Insider. One interesting element is its apparent lack of arsenic-proofing genes, as he told Science Insider and Cosmic Log — E. coli has even more of them.

Clearly this debate is far from being put to rest.