In the 1980s, doctors noticed that chronic-ulcer patients who received a “vagotomy”—cutting the vagus nerve that controls the stomach—lost their... 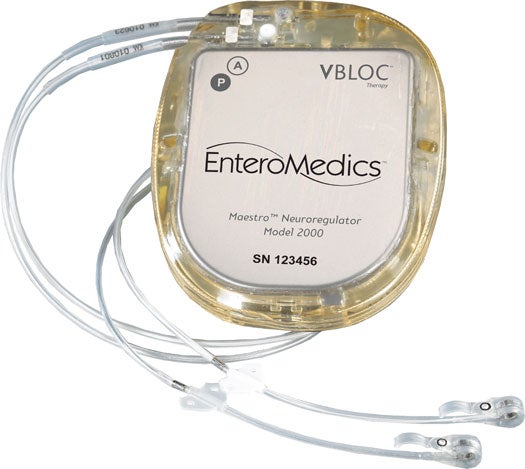 In the 1980s, doctors noticed that chronic-ulcer patients who received a “vagotomy”—cutting the vagus nerve that controls the stomach—lost their ulcers and ended up with an intriguing side effect: They lost weight. The vagus nerve is the main route for signals between the stomach and the brain, regulating acid production, stomach expansion and satiation. Now medical companies are working on a pair of devices that modify these signals to help people with obesity.

The VBLOC, by EnteroMedics in St. Paul, Minnesota, is a small abdominal-cavity implant that blocks vagus-nerve signals by zapping the nerve with electric pulses. A similar implant, the Abiliti by IntraPace, based in Mountain View, California, sends additional signals instead of stopping them. The device electrically stimulates the stomach wall, which is thought to send a “full” feeling to the brain. Patients in VBLOC and Abiliti trials have shed, respectively, up to 30 percent and 38 percent of their body weight. Both devices could be on the U.S. market by 2014.