Science Ink: A Taxonomy of Tattoos Inspired by Science

A few years ago–by accident, really–Carl Zimmer became the de facto curator of science-based body art. The author of The... 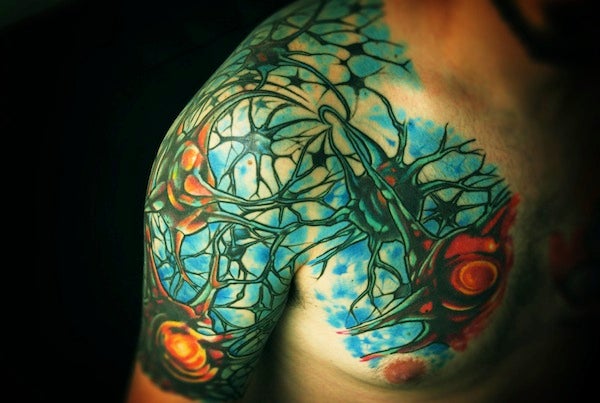 Gabriel Pato's neural net goes from front to back, giving it a 3-D appearance. Which is more accurate, scientifically speaking. The human neural net shows order arising out of the chaos of a disorganized network of neurons. Researchers are still trying to figure out exactly how. But it's a beautiful display of physiology and biology creating very complex order from seeming disorder. And it's beautifully executed here. Used with permission from SCIENCE INK by Carl Zimmer. Published by Sterling Publishing © 2011
SHARE

A few years ago–by accident, really–Carl Zimmer became the de facto curator of science-based body art. The author of The Loom blog over at DISCOVER as well as numerous books, Zimmer asked his readers about their tattoos, and whether any of them had inked themselves up in science-inspired motifs. The response was greater than he imagined.

Those responses, which often arrived in Zimmer’s inbox in the form of images, have now been compiled into a book published earlier this month, . In it, the science obsessed–or at least those enthusiastic enough to etch their favorite equations, diagrams, schematics, and formulas directly onto their dermises–show off their needlework in a coffee table-worthy collection of pics, arranged by Zimmer into categories centered on major scientific disciplines: math, chemistry, neuroscience, evolutionary biology, astronomy, and a dedicated chapter on DNA.

From those pages we’ve pulled a few of our favorite works–from Darwin’s finches to a Dali-like double helix to a front-to-back neural net–and collected them here. Click through the link above to see some of our favorite science-derived ink from the collection. 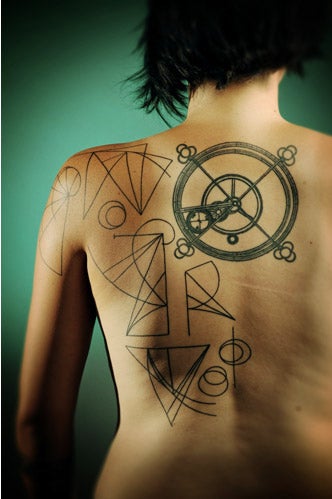 Lauren Caldwell’s tribute to Giovanni de’ Dondi’s 1364 Il Tractatus Astarii, the first famous Astrarium, which is a mechanical planetarium that mimics the paths of the stars and planets. In other words, it’s an astronomical clock Archimedes used a primitive model, but the first real working astrarium clock is credited to de Dondi. The backpiece here is the Mercury Wheelwork.

Gabriel Pato’s neural net goes from front to back, giving it a 3-D appearance. Which is more accurate, scientifically speaking. The human neural net shows order arising out of the chaos of a disorganized network of neurons. Researchers are still trying to figure out exactly how. But it’s a beautiful display of physiology and biology creating very complex order from seeming disorder. And it’s beautifully executed here. 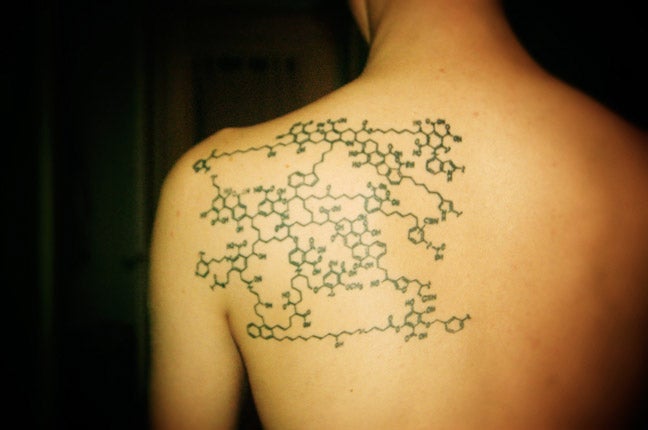 Says Science Ink: Cory Ptak got this tattoo, a model of fulvic acid, as a tribute to his graduate work. He worked with the molecule so much that he thought getting it etched into his skin would be less painful than the time he spent at Cornell. 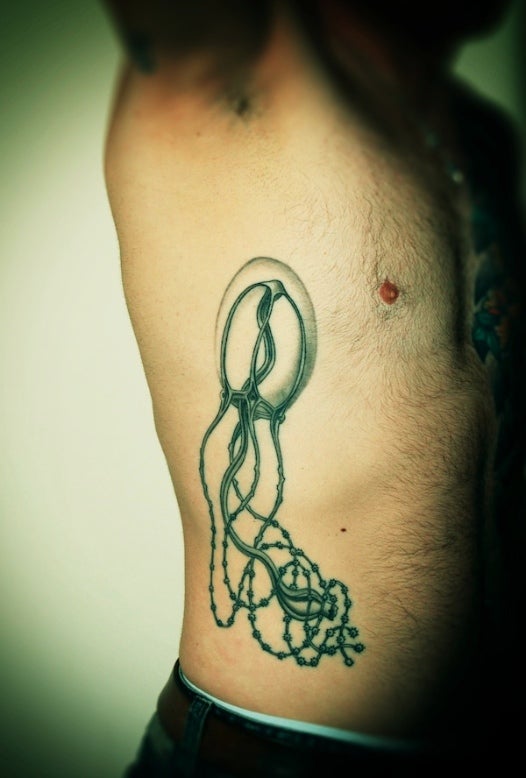 There’s not much to say about Dave Wolfeden’s jellyfish. It’s a jellyfish, and it’s awesome. 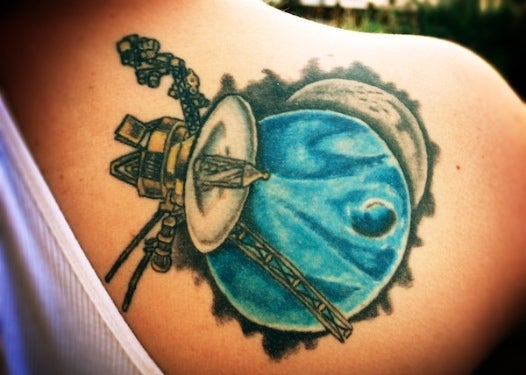 Everyone loves the deep space probe Voyager. Heather Wilkinson likes it so much she commissioned this piece. Voyager 1 is now the furthest human-made object from Earth and on its way out of the solar system. Voyager 2 isn’t far behind. 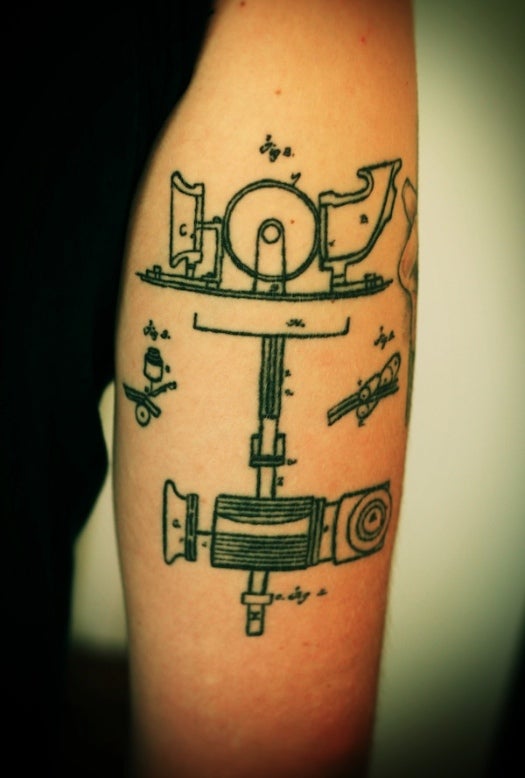 Old schematics make for good art, and Tyler Rollins’ drawing of Edison’s patent for a recording device makes for a perfect forearm piece. It’s a fitting tribute, as Rollins is a musician. The drawings here would become the first phonograph, an invention that would set the recording industry in motion. 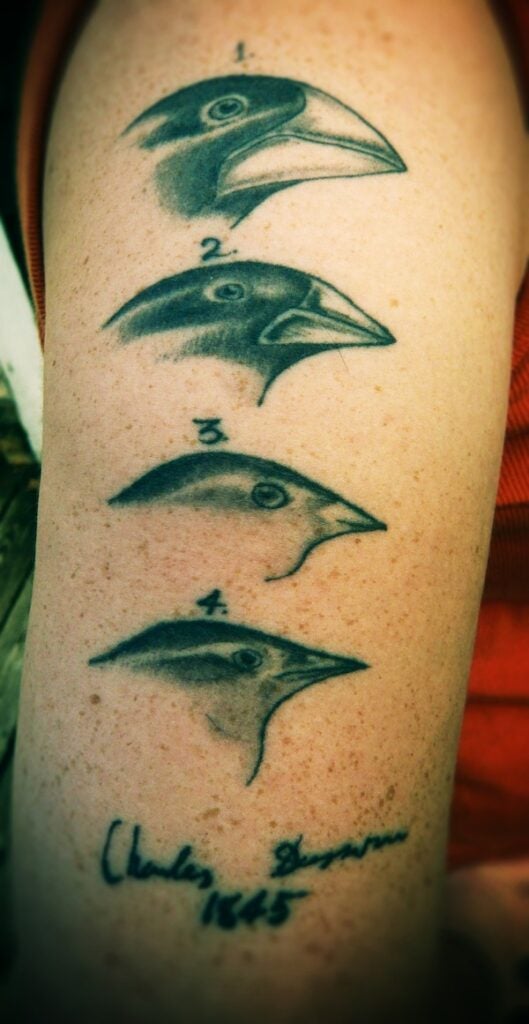 Everyone knows the story of Darwin’s finches and the way their genetic diversity led him to conclude that the process of natural selection drives the evolution of life on this planet. Though already immortalized in Darwin’s On the Origin of Species, Rachel Crews pays Darwin’s finches further tribute here. 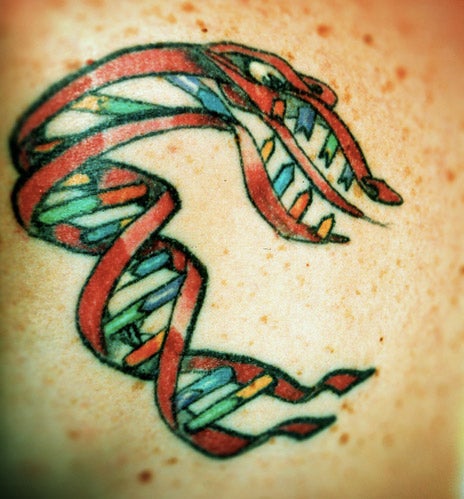 Jay Phelan, a biologist at UCLA, got his DNA tattoo in 1990. It represents the tension between what his genes wanted him to do, vs. what he, as a person, wanted to do. 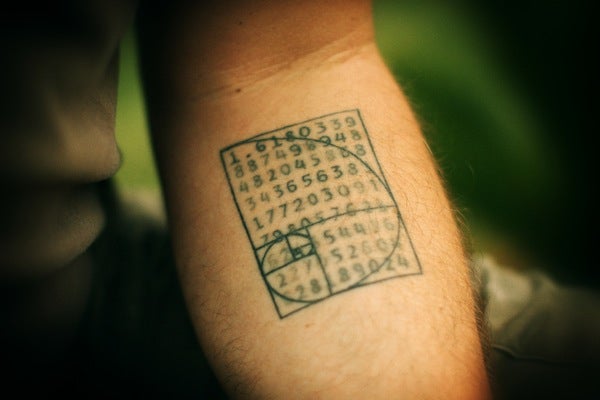 The “Golden Ratio” is a popular theme in Science Ink. Here, Brandon Davis shows off both the spiral, and the number that backs it up (roughly 1.618033988749).
astronomy
biology
cosmology
dna
forensic science