Good news for the countless people across the globe suffering from some kind of squamous cell carcinoma (SCC), which includes... 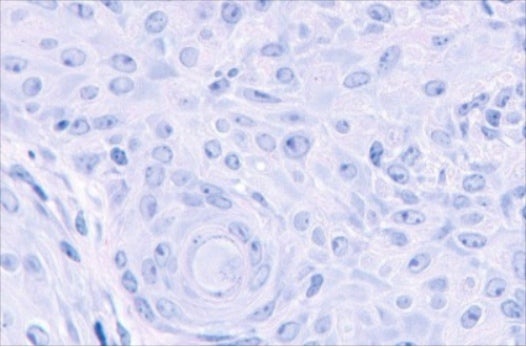 Good news for the countless people across the globe suffering from some kind of squamous cell carcinoma (SCC), which includes a large proportion of those dealing with skin cancer. Australian researchers have discovered the “stop signal” gene for SCC that is absent in virtually every SCC tumor they looked at. Without it, cells replicate uncontrolled causing a tumor, but knowing what gene is missing gives researchers the means to develop new strategies to treat and prevent this common form of cancer.

Squamous cell carcinoma is the second-most prevalent form of skin cancer, and 700,000 cases are diagnosed in the U.S. alone every year. Yet up until now, SCC’s genetic underpinnings were somewhat mystifying to medical researchers. Scientists couldn’t figure out why, at some point, some skin cells begin multiplying in an uncontrolled manner, eventually resulting in cancer.

The answer apparently was hiding in a single gene that plays a key role in the development of skin during the fetal stage of life. This gene is missing in SCC tumor cells and, as it turns out, provides the signal for cells to stop multiplying. That’s huge news for the fight against skin cancer, as well as other varieties of SCC that occur elsewhere in places like the head and neck. Knowing what they now know, researchers should be able to target treatments at that missing signal that could prevent–or at least halt–the spread of SCC.

Moreover, the researchers think that drugs that are already in clinical trials for other cancers might be effective in treating SCC skin cancers. If so, that could cut years off the development process.