Get ready to witness some James Bond-esque, HALO-style active camouflage action. Researchers at the University of Texas at Dallas have... 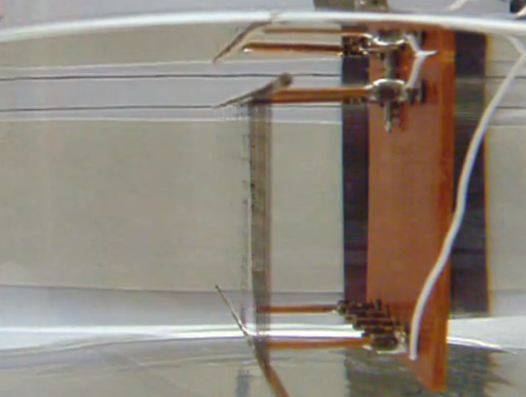 Get ready to witness some James Bond-esque, HALO-style active camouflage action. Researchers at the University of Texas at Dallas have cleverly tapped the unique characteristics of carbon nanotubes and the light-bending weirdness of the mirage effect to create a kind of invisibility cloak that can be turned on and off at the flip of a switch.

Though not quite ready to be integrated into an Aston Martin (it works best underwater actually), it is a pretty neat trick, and it could someday have a range of applications outside the lab. The cloaking capability is rooted in the mirage effect, the same phenomenon that occurs when temperatures vary greatly over a short distance. That variation in temperature causes light rays to bend toward the viewer’s eye rather than bounce off of objects normally.

That’s why people tend to see false pools of water in the desert. They are actually seeing the sky on the desert floor–light from the sky bends as it nears the heated ground and heads directly toward the viewer, therefore appearing as a sheen of blue coming from the ground. From there, the brain does the rest, seeing water rather than sky because that makes a lot more sense.

The same effect is happening in the video below. Using highly conductive carbon nanotubes–one-atom-thick layers of carbon wrapped into cylinders–pressed into a transparent sheet, the device you see is able to quickly heat the fluid around it (in this case, water), causing the mirage effect to conceal the object on the other side. And it does so nearly instantaneously.