UK Man Gets Prosthetic Limb With A Smartphone Dock Built In

Trevor Prideaux was having trouble texting. Prideaux, who was born without his left forearm, used to have to balance his... 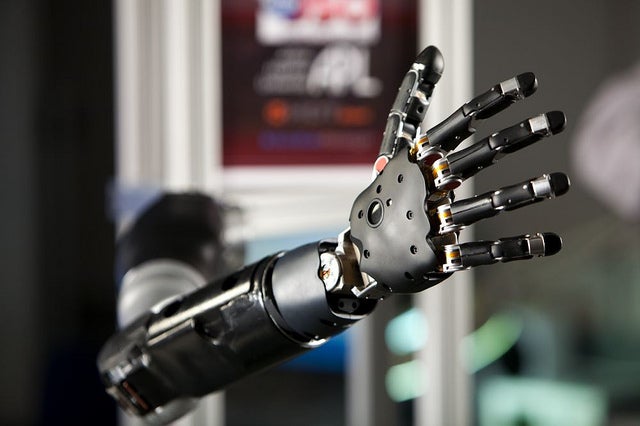 Trevor Prideaux was having trouble texting. Prideaux, who was born without his left forearm, used to have to balance his smartphone on his prosthetic arm or lay it on a flat surface to text, dial, or otherwise take advantage of the technology. So with some help form the Exeter Mobility Center in Devon, UK, the 50-year-old Prideaux has become the first person to have a smartphone dock embedded in his prosthetic limb.

With some design help from Nokia and the prosthetics team at EMC, Prideaux’s Nokia C7 is now fixed within his prosthetic forearm (he went to Apple first hoping to mount an iPhone, but Cupertino declined to participate in his project). He can now easily text by using his one hand, or field calls either by putting his prosthetic forearm up to his ear or by using speakerphone, leaving his biological limb free.

The very idea of it gets the idea mill churning. Right now, the prosthesis is a prosthesis and the phone is simply a phone, but the idea of integrating the two opens the door to some unique possibilities. Aside from being able to record data on how the limb is used to help designers better customize the prosthesis to the person, the limb could also be augmented to make better use of the phone/computer. Maybe some extra battery on board the limb? Some speakers for better speaker phone usage (and for the wearer’s listening pleasure, should he or she require some tunes). Call it primitive cyborg tech with a lot of potential. Photos via the Telegraph below.