Space Rocks Like This One Probably Helped Deliver Earth’s Oceans

Earth’s oceans likely started out as space snowballs born far beyond the orbit of Pluto, a new study says. Water-rich... 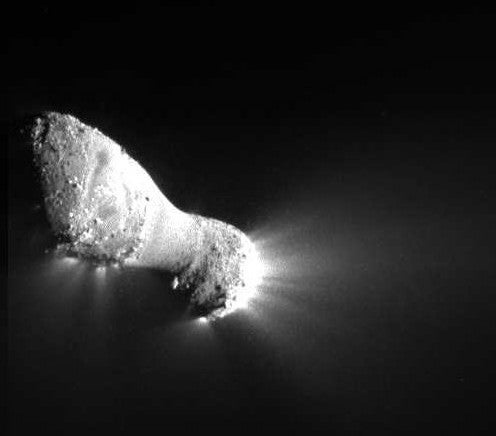 Earth’s oceans likely started out as space snowballs born far beyond the orbit of Pluto, a new study says. Water-rich comets collided with the young planet after hurtling through the nascent solar system, and probably delivered a significant amount of the water on this planet.

After its formation, Earth was too hot to hold on to its original water, yet 71 percent of the planet is oceans, meaning something else must have deposited it here. Comets contain much more water than asteroids, but all previously studied comets had the wrong water isotope ratios, so scientists figured only about 10 percent of Earth’s water was cometary in origin. Researchers thought meteorites, which may have also delivered our gold and other precious metals, must have brought Earth its water.

But the comet Hartley 2, a peanut-shaped Jupiter-family comet, contains water with almost exactly the same chemical signature as water on Earth, according to a paper published in the online version of Nature. Hartley 2 is believed to have come from the Kuiper Belt rather than the Oort Cloud, like many comets do. Hartley’s composition suggests there’s an entire population of Kuiper Belt objects that may have migrated inward as the solar system was still forming, bringing water to this planet.

The key ingredient in these studies is deuterium, an isotope of hydrogen that has one neutron where regular hydrogen has none. Deuterium-rich water is also known as heavy water. Earth water has about 1,558 deuterium atoms per 10 million regular hydrogen atoms. Astronomers used the European Space Agency’s Herschel Space Observatory to measure the ratio of regular hydrogen to deuterium in Hartley 2’s ice.

All previously studied comets have had deuterium levels about twice that of Earth’s oceans, meaning they could not have contributed much of Earth’s water. But Hartley’s levels are very close — about 1,610 deuterium atoms for every 10 million regular hydrogens. A comet’s deuterium ratios are related to where it forms in the solar system.

Researchers at ESA and NASA said the results support the idea of a very volatile early solar system.

“Comets and asteroids must have been moving all over the place, and it appears that some of them crash-landed on our planet and made our oceans,” Geoffrey Blake, professor of planetary science and chemistry at Caltech and a co-author on the paper, said in a statement.

The researchers say further comet studies, and perhaps some comet visits, would shed more light on the question. NASA is contemplating a comet hopper mission that would alight on a comet and measure how it changes as it interacts with the sun. Perhaps such a mission could also examine more D/H ratios, further explaining how Earth got all its water. 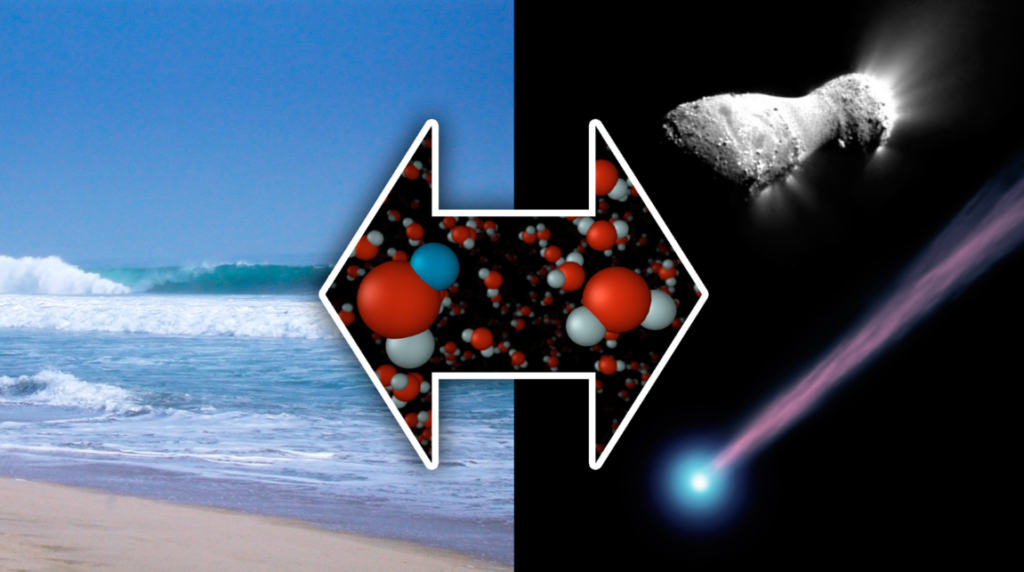 Comet Hartley and the Oceans

New measurements from the Herschel Space Observatory show that comet Hartley 2, which comes from the distant Kuiper Belt, contains water with the same chemical signature as water in Earth’s oceans.