How Different Genes Work Together In a Worm

The roundworm Caenorhabditis elegans has been a staple of biology research for almost 50 years, but, thanks to advances in... 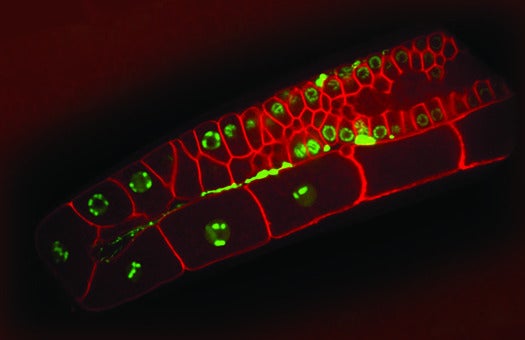 The roundworm Caenorhabditis elegans has been a staple of biology research for almost 50 years, but, thanks to advances in molecular-biology techniques, scientists are just now able to study how multiple genes (C. elegans has 20,470 genes in its genome) act in concert to produce complex organs. In an anesthetized worm’s healthy gonad, eggs start out as tiny cells [upper right corner] and snake around counterclockwise as they mature.

To find out how 554 genes work together to build this ova assembly line, biologists at the University of California at San Diego and New York University disabled one gene at a time. “Knocking down” some genes caused the cells to have too many or too few chromosomes. The suppression of other genes stopped the cells from growing to full size. Scientists can use the data to determine the function of related genes in humans.