Another day, another wrinkle in the year's biggest physics story 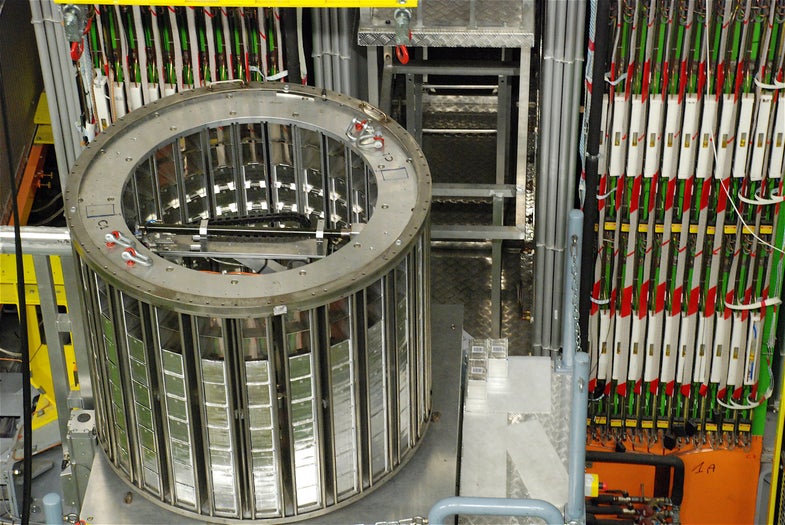 Last week’s bombshell physics news–those superluminal neutrinos that CERN’s OPERA experiment clocked moving faster than the speed of light–are already getting the rigorous vetting that OPERA’s researchers were hoping for. And some physicists are already rejecting the notion that CERN’s neutrinos broke the cosmic speed limit outright. A paper posted late last week, titled “New Constraints on Neutrino Velocities,” argues that any particle traveling faster than light would shed a great deal of their energy along the way.

And since that didn’t happen, those neutrinos couldn’t have traveled faster than light. Case closed.

So let’s go a little deeper here. The physicists behind this assessment, Andrew Cohen and Sheldon Glashow of Boston University (Glashow has a Nobel under his belt, so these are no middling minds), ignore the debate over whether or not it’s possible for a fundamental particle to outpace the speed of light, and instead look directly at the OPERA neutrinos themselves.

In looking at the neutrino beams that landed at Italy’s Gran Sasso laboratory, Cohen and Glashow found that it was about the same as the beam emitted from CERN in Switzerland. That is, the neutrinos were of roughly the same high-energy flavor at their origin and at their destination.

But that’s not possible if these neutrinos surpassed the speed of light, they say. A neutrino achieving superluminal speeds would emit other lower energy particles–most likely an electron-positron pair– along the way, and in doing so lose a good deal of its own energy. So the neutrino beam arriving at Gran Sasso should have been “significantly depleted” of high-energy neutrinos.

But this was not the case. Which means, they say, that in all likelihood these neutrinos never achieved superluminal speeds. The anomaly is an error in the data or measurement of the speed, or some other brand of misunderstanding or miscalculation.

Which makes a certain amount of sense, writes Steve Nerlich over at Universe Today over the weekend. Neutrinos do move very fast, straight through the Earth (neutrinos don’t interact much with normal matter), relying on GPS time-stamping and other methods of man-made measurement that are very precise but certainly not infallible to determine time and distance traveled.

And it’s not like these neutrinos were clocked doubling the speed of light or something like that–the difference is 60 nanoseconds. That’s another way of saying that the neutrinos in question are thought to have traveled at 1.0025 times the speed of light. That’s certainly a small enough margin to be explained away by some kind of measurement error.

Still, the jury remains out on this one, and we certainly don’t want to dismiss a perfectly good game-changing science story just because it seems hard to reconcile with the status quo. After all, if OPERA’s result turns out to be confirmed it is going to completely reorient physics as we know them. More on this as it develops.