This chaotic image, published in the journal Nature, has been described as a “pit of writhing snakes.” Using the Australia... 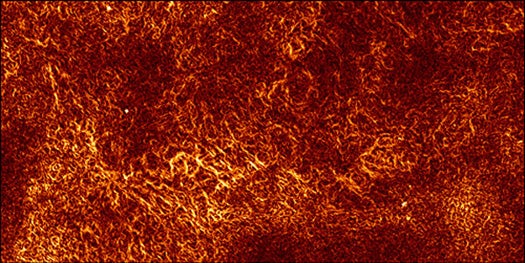 This chaotic image, published in the journal Nature, has been described as a “pit of writhing snakes.” Using the Australia Telescope Compact Array, researchers studied the interstellar regions in the Norma constellation, 10,000 light-years away. “This is the first time anyone has been able to make a picture of this interstellar turbulence,” says lead author Professor Bryan Gaensler of University of Sydney. The image shows that the space between stars is actually full of continually churning gas.

The telescope picks up radio waves, and the data used to create the image is actually 12 years old. The unpolarized radio emissions from the region give a normal picture of the Milky Way disk, with bright areas around forming stars caused by cosmic rays and magnetic fields. “But when we studied the polarized emission, we saw structures that were completely different from the pictures that have been done before,” says Professor John Dickey of the University of Tasmania. “It took several years for us to understand the physical processes that shape the linear polarization at radio frequencies.”