Yes. We drill into the earth to mine for gas, oil and minerals and construct massive dams and, as a... 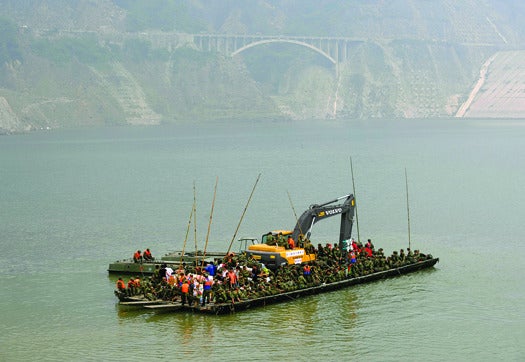 A boat containing rescuers and an excavator is seen making it's way to Yingxiu town, on the Zipingpu dam in China's southwestern province of Sichuan on May 16, 2008. Cries for help echoed from under the rubble of shattered communities as China warned time was running out to save survivors of an earthquake that has claimed an estimated 50,000 lives. The first foreign rescue teams were allowed into the disaster zone to join the frantic -- and increasingly grim -- search for life among the huge mounds of concrete and metal that were once homes, schools and factories. AFP PHOTO/ LIU Jin (Photo credit should read LIU JIN/AFP/Getty Images). LIU JIN
SHARE

Yes. We drill into the earth to mine for gas, oil and minerals and construct massive dams and, as a result, have caused at least 200 quakes of more than 4.5 magnitude in the past 160 years, says Christian Klose, a researcher at Columbia University who studies man-made quakes.

The best-known case is the earthquake caused by the Zipingpu Dam, in China’s Sichuan province, in 2008. Zipingpu held 42.3 billion cubic feet of water, the weight of which precipitated what Klose says is the largest human-triggered earthquake to date: a 7.9-magnitude quake that killed nearly 80,000 people. Klose estimates that Zipingpu, with nearly 320 million tons of water pressing down on a fault line, contributed enough stress to trigger the quake through a process called impoundment. “If you push your finger on top of a paper plate, the plate will bend,” he says. “That same effect works on all the tectonic plates on the Earth’s crust.” The quake occurred two years after the dam’s completion, and its epicenter was a mere three miles from the structure.

Authorities in Basel, Switzerland, shut down the city’s geothermal plant after a 3.4 quake in 2006. Tapping geothermal energy involves boring into rock miles beneath the Earth’s crust in search of steam as a source of energy. Engineers in areas without much water, such as Basel, sometimes create boreholes by way of hydraulic fracturing, or “fracking,” which involves forcefully injecting water to create fissures. Fracking can generate small tremors, but the real damage may happen as excess liquid pools in the cracks between rocks, making them less stable. Although dams have caused some 76 earthquakes, mining is responsible for at least 137 earthquakes, over half the number of man-made quakes to date.

In 1989 a 5.6-magnitude earthquake hit Newcastle, Australia, the direct result of coal mining. Extracting millions of tons of coal added stress to the fault lines, but the real danger resulted from the water that was extracted during mining. For each ton of coal produced, Klose estimates, 4.3 times as much water was pumped out of the ground, a necessary step to prevent flooding inside the mine. But removing so much water dramatically altered the stability of the earth surrounding the mine. Klose says the earthquake caused $3.5 billion in damage—an amount that nearly equaled the profit of all the coal produced by the mine over its 200-year history.