Last year, as climate change deniers were up in arms over the so-called “Climategate” controversy involving alleged manipulation of climate... 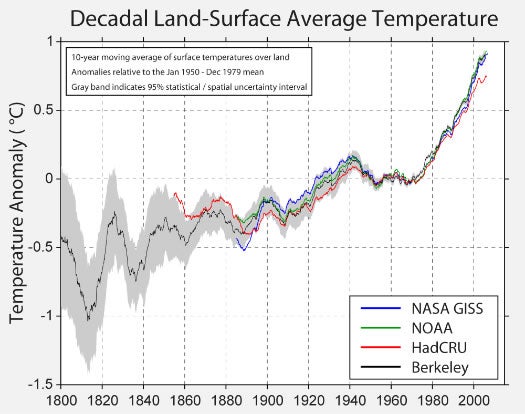 Last year, as climate change deniers were up in arms over the so-called “Climategate” controversy involving alleged manipulation of climate data, one skeptical scientist proposed taking a fresh look. Richard Muller, a physicist at the University of California-Berkeley and a self-described climate skeptic, undertook to review the temperature data underlying most global warming studies. Now his team has wrapped up their work, and it apparently solidifies the other studies’ findings.

Actually, the Berkeley Earth Surface Temperature project found the Earth is getting even warmer than other climate scientists claim.

The findings have neither been peer-reviewed nor published, so some skeptics and deniers are as yet unsatisfied, but Muller says the group has submitted the papers for publication. Meanwhile, the data is all online for anyone’s review.

Muller said earlier this year that he was surprised by his own findings; now he accepts what other groups have been saying for years, that the Earth is getting warmer in most locations over time.

The BEST study is notable for a few reasons aside from Muller’s skepticism and the study’s funding sources, which include the climate-change-denying Charles and David Koch — it’s also a very comprehensive look, examining skeptics’ claims in detail and with a gigantic amount of data points. The study combined 1.6 billion temperature reports from 39,000 temperature stations around the globe, using 15 preexisting data archives.

The goal was to examine some of the most common claims from climate skeptics (let’s agree that there is a line between skepticism and denialism), which include: The poor quality of temperature monitoring stations; the poor siting of stations in cities, where they could be subject to urban heat-island effects; and the relatively small amount of available data employed by NASA, NOAA and the UK’s Met Office and Climatic Research Unit.

Statisticians developed a new approach that let them use fragmented records, such as those from unreliable monitoring stations, which embiggened the overall data set by about five times. Muller’s team also used satellite images to divide the world into urban and rural areas, which allowed them to correct for heat-island effects. And they ranked the quality of the monitoring stations, and found even poor stations accurately track temperature changes over time.

Their conclusion? “Global warming is real.” Very real, if their numbers are to be believed — the BEST analysis found that at the locations that showed warming, temperatures rose by an average 1 to 2 degrees Celsius, much higher than the U.N. Intergovernmental Panel on Climate Change estimate of 0.64 degrees C.

“Perhaps our results will help cool this portion of the climate debate,” he wrote in an op-ed about the work. Adding: “How much of the warming is due to humans and what will be the likely effects? We made no independent assessment of that.”