We all know takeout food sometimes requires special utensils to be eaten properly. The same is true for fish. (The... 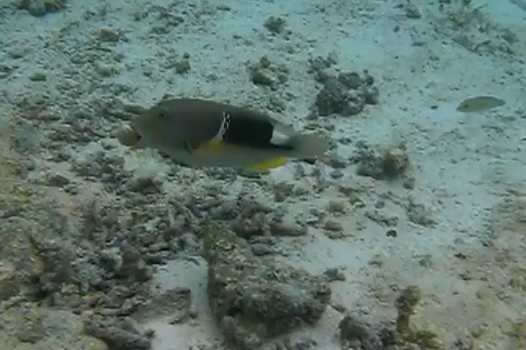 We all know takeout food sometimes requires special utensils to be eaten properly. The same is true for fish. (The food they’re eating, not takeout fish.) Below, behold the first video of a reef fish using a tool — and traveling a great distance to find it.

The orange-dotted tuskfish, a species of wrasse, is the second type of wrasse documented using tools in the past few months. A blackspot tuskfish was caught on camera earlier this year; now the first video has been published.

The fish digs around in the sand to find a choice clam, picks it up, then swims for a while until it finds a good rock. It proceeds to throw the clam against said rock to open it. This is a fish, remember — not the type of creature you might expect to see using tools. Dolphins, elephants, rats, sure — but a fish?

“It requires a lot of forward thinking, because there are a number of steps involved. For a fish, it’s a pretty big deal,” said Giacomo Bernardi, professor of ecology and evolutionary biology at the University of California, Santa Cruz, who shot the video.

The fact that this behavior has been seen in other fish indicates it may not be a recent evolution, but a deep-seated behavioral trait in wrasses — and maybe other fishes, too.