Researchers at Imperial College London and the University of Oxford have pioneered a new technique to see exactly how our... 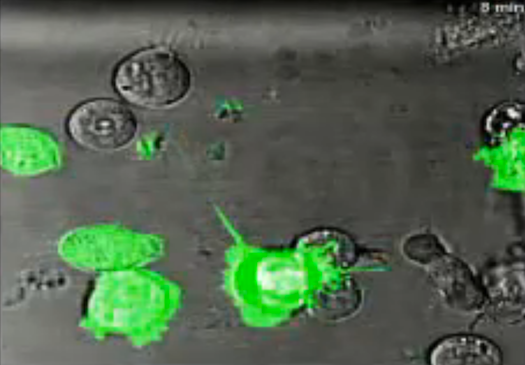 Researchers at Imperial College London and the University of Oxford have pioneered a new technique to see exactly how our body’s “natural killer” white blood cells actually do their dirty work. It’s the first time we’ve ever been able to see how this element of the body’s natural defenses actually works.

There are myriad difficulties in trying to observe this kind of event. For one thing, the cells are incredibly small, and execute their, well, executions (that’s an apt description, as you’ll see) very, very quickly. Then there’s the problem that the cells are three-dimensional (of course), while the high-speed microscopes used for this are only capable of seeing the horizontal plane. (3-D cameras are not, at the moment, quick enough to work for this.) Previously, researchers would have to painstakingly capture many 2-D images, then stack them on top of each other–not very efficient, and not particularly effective, either.

So how did these researchers pull it off? Says Professor Paul French of Imperial College London: “Using laser tweezers to manipulate the interface between live cells into a horizontal orientation means our microscope can take many images of the cell contact interface in rapid succession. This has provided an unprecedented means to directly see dynamic molecular processes that go on between live cells.” But taking lots of images at once, the researchers can reconstruct a 3-D image with ease.

What’s going on in that video above is essentially an execution. Inside the “natural killer” or “NK” cell, enzyme-filled granules organize, ready to stream out as soon as the cell creates a portal. Then, the granules attack the diseased cell. In this case, the NKs are using membrane nanotubes to pull them in, like a bungee cord.

NKs are used by the body to attack all kinds of damaged cells, from tumors to viruses, though they also sometimes attack transplanted organs. By understanding the intricacies of this operation, the scientists hope to create better medical treatments–they might use NK cells in medicine, or discover ways to stop them from attacking foreign but welcome tissue.