IBM and 3M are collaborating on a new kind of semiconductor glue that will bind together future generations of 3-D... 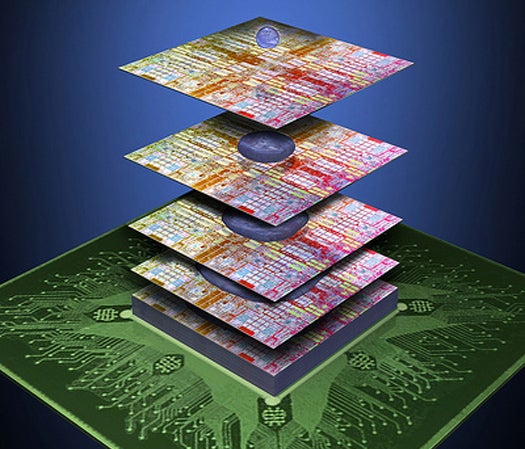 IBM and 3M Corp. are developing a new type of electronic glue that can be used to build stacks of semiconductors  3D chips. The glue, shown in blue above, connects up to 100 separate chips as it conducts heat away from the silicon package. The innovation will create microprocessors 1,000 times more powerful than todays PC chips.
SHARE

IBM and 3M are collaborating on a new kind of semiconductor glue that will bind together future generations of 3-D semiconductor chips. The idea is to create a whole new kind of adhesive that hold things tightly together while also conducting heat and insulating at the same time.

In other words, it doesn’t sound easy. But a material like this is necessary if companies like IBM are going to move beyond stacking a few layers of silicon and get down to the business of stacking 100-chip towers that will power the devices of the future.

3-D semiconductors are basically multi-layered chips that can stack computing power, networking, and memory all into one neat system-on-a-chip. Right now companies like IBM can stack a handful of chips, but what they want are silicon towers. That means they need some kind of mortar that possesses these unique properties to hold everything together. That’s what 3M and IBM are striving for: some kind of adhesive that could coat entire silicon wafers, holding them tightly together while still dissipating heat away from heat-sensitive components like logic circuits.

And they want it by 2013–about the same time the first generation of smaller 3-D processors is expected to hit the market in mobile devices. If they get it right, they predict that they could leapfrog today’s existing processor technology, creating a silicon “brick” 1,000 times faster than today’s fastest microprocessors.