Brain-Scanning “Painometer” Is an Attempt to Measure Pain Objectively

Pain must be the bane of many a doctor’s existence. It’s a major symptom and indicator of many illnesses, but... 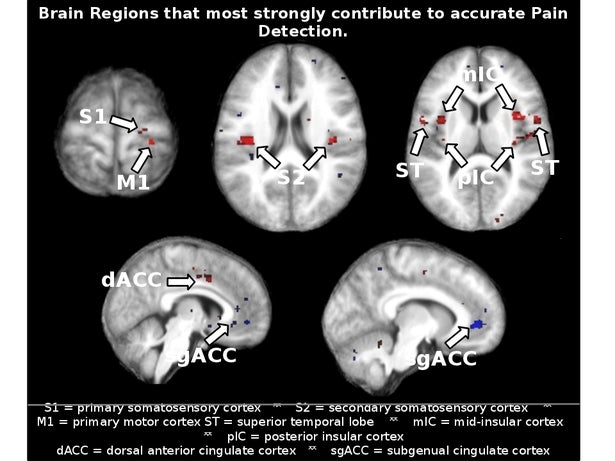 Pain must be the bane of many a doctor’s existence. It’s a major symptom and indicator of many illnesses, but doctors have to rely on humans to describe and rate it, and humans are a distinctly unreliable source of information. What’s a “7” on the pain scale for someone might be a “4” for another. What’s a “pulsing” pain for someone might be a “pounding” for someone else. At Stanford, some doctors are figuring out the first steps to objectively measure pain, finally putting that all to rest.

A new, very early version of a “painometer” is being tested at Stanford. The tests are actually sort of medieval-sounding, but to test pain, you’ve got to inflict pain. Subjects were touched with a heat probe (on the arm, people) and the ensuing brain signals were measured. Those measurements were used to create an algorithm that, the researchers hoped, would be able to indicate pain.

The algorithm does work, though not perfectly; the current accuracy rating is around 81%, which is plenty to show that it works but also not nearly high enough to actually rely on. The other major problem is the relative lack of understanding we have about the nature of pain: this test, says Sean Mackey, an associate professor and member of this project’s team, only measures “thermal pain” in a lab setting, and “We should take care not to extrapolate these findings to say we can measure and detect pain in all circumstances.”

Still, it’s a major step forward to creating a real, objective pain sensor, which could have some pretty major effects on diagnostic medicine, as well as helping those who are too young, too old, or otherwise unable to properly communicate their degree of pain. Then we can get back to making pain medicine out of sea-snail spit and marijuana.