Fermilab’s Tevatron collider runs out of money and time at the end of this month, but physicists there say that... 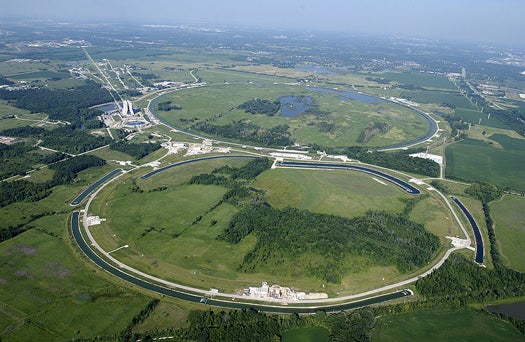 Fermilab’s Tevatron collider runs out of money and time at the end of this month, but physicists there say that they are on track to establish whether the Higgs can exist within the most likely predicted mass range before their September 30 deadline. That’s not the same as actually finding the Higgs boson of course, but physicists say they’ll either rule out the possibility of its existence or not by month’s end.

The Higgs boson, also known as the “God particle,” is the most important missing piece in the Standard Model of particle physics and the theoretical particle thought to imbue all other particles with mass (that’s important). Tevatron has been in competition with CERN’s Large Hadron Collider to find the Higgs first–if it really exists, that is–but so far the God particle eludes physicists at both facilities.

However, the Higgs window is narrowing. Through trillions of particle collisions at varying energy levels, physicists have explored much of the range where the Higgs is predicted to be hiding. And that’s what Fermilab researchers are saying–that by month’s end, they’re pretty sure they will have the information they would need to rule out the existence of a Higgs with a mass within the most likely range.

That means physicists will have to get creative in the way they think about what the Higgs really is, or perhaps begin considering alternative theories of how things came to be.

But if it turns out the Higgs does appear to be present within that mass range, it will still be too late for Tevatron to actually find it. With no funding beyond the end of the month it will have to step aside and watch the LHC continue to search for the elusive particle within that range.

The LHC has its own set of deadlines for finding the Higgs, though none are set in stone. CERN’s director general thinks that the LHC’s data should be able to come to a preliminary conclusion about whether or not the Higgs is real by year’s end, and that hard scientific proof one way or the other should emerge next year.