A trifecta of sunsplosions over the past few days has prompted government agencies to once again warn of possible power... 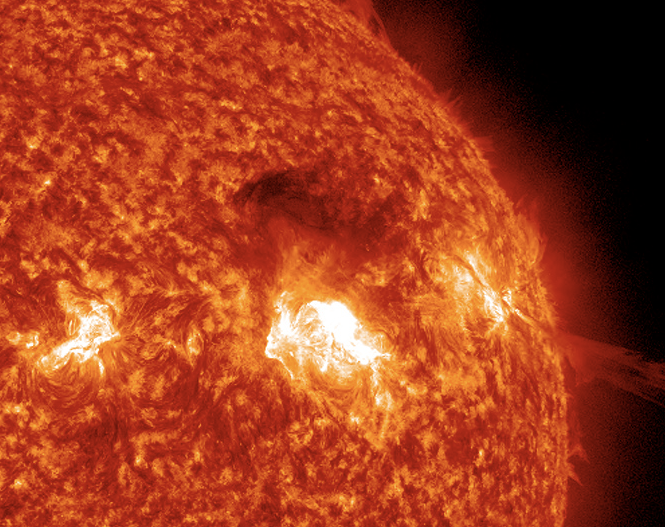 A trifecta of sunsplosions over the past few days has prompted government agencies to once again warn of possible power and communications disruptions. The coronal mass ejections could produce a strong aurora as far south as Minnesota and Wisconsin, according to space weather forecasters at NOAA.

2011 has already been a big year for solar flares, with a previous CME in February disrupting shortwave communications in China and ship-to-shore radios. That flare led to aurora borealis as far south as Great Britain. Then in June, a relatively smaller flare belched a billion tons of material away from the sun before it collapsed back to the surface.

The first CME already passed the Earth late last week, and the second two are affecting us right now, according to Reuters. The Space Weather Prediction Center at NOAA is forecasting a moderate to strong magnetic storm. The second two flares impacted an already compressed magnetosphere, so additional solar activity could exacerbate the disturbance — or do nothing at all, forecasters said.

It’s all part of the sun’s ramped-up cycle of activity, which is expected to peak sometime in 2013. Scientists have been beating the drum about solar activity preparations as the 11-year solar cycle continues, because a massive flare can disrupt satellites, power grids and telecommunications. Here’s hoping this triple threat is it for a while.