The perceived future of driving tends to revolve around a networked traffic infrastructure in which cars, traffic signals, and other... 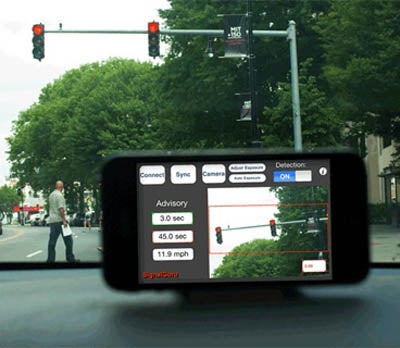 The perceived future of driving tends to revolve around a networked traffic infrastructure in which cars, traffic signals, and other roadway implements talk to each other electronically to optimize traffic flow and make driving more efficient all around. But MIT researchers think we can do many of these things on an existing network: the one that ties all of our smartphones together. A network of camera-equipped mobile devices mounted on dashboards could crowd source information about traffic signals and tell drivers what speed to maintain to avoid waiting at traffic lights.

The idea stems from an already popular smartphone setup in which drivers perch their smartphones in dashboard brackets and use them as navigation devices. The MIT team built their SignalGuru app to take advantage of the camera on the other side of the phone by collecting stoplight data as cars drive around and feeding it back to a central system that then builds a larger picture of a city’s traffic flow.

The system could presumably be built out to incorporate all kinds of other useful data, the researchers say, like the locations of city buses, gas prices (via gas station signage), or where parking spaces are available. But the main idea is to build a realtime network of traffic signal timing. The app can then use GPS location to tell where a driver is, how quickly he or she is approaching a stoplight, and where that stoplight is in its green-yellow-red cycle.

From there, it does some simple math, telling the driver what speed to run to ensure he or she doesn’t have to make a complete stop at the upcoming light. That generally involves slowing down, but it doesn’t cost the driver any time overall, and the savings are in the gas tank. In tests, SignalGuru helped drivers shave 20 percent off their fuel consumption by cutting down on stopping and accelerating.

In those same tests SignalGuru was able to establish accuracy down to two-thirds of a second for signal changes. That could theoretically improve even more with more data–that is, with more people using the system. That’s both the key and the catch: SignalGuru is one of those things that only works with lots of data. So it might be difficult to get enough people participating in the system, but once it hit a certain tipping point it could become a very effective system that requires no additional roadway infrastructure to be installed.