An international team of researchers spanning Australia, North America, and Europe has created a model for a new kind of... 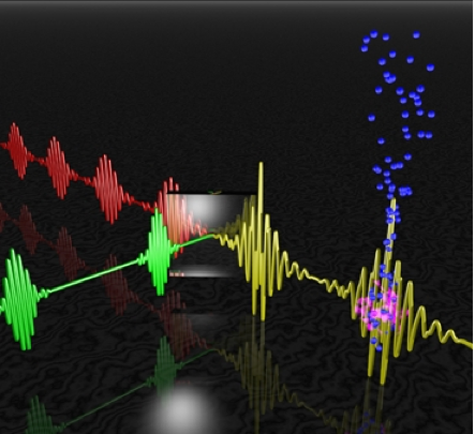 An international team of researchers spanning Australia, North America, and Europe has created a model for a new kind of attosecond laser that should be able to film individual electrons as they participate in chemical reactions. Such high-res, high-speed data gathering has never been achieved before, and if successful the new laser system could have implications for everything from basic chemistry to complex pharmaceutical research and chemical engineering.

Capturing electrons on “film” isn’t easy–imagine the shutter speed you would need to capture something moving so fast that it can rotate a central hub in 151 billionths of a billionth of a second. That’s how fast the electron orbiting a hydrogen nucleus is moving, so in order to capture it in the act you need something with attosecond resolution. In other words, you need a laser capable of pulsing at the attosecond scale.

Attosecond laser pulses have been demonstrated before, but they were too weak to actually measure electron dynamics. For that, you need something both fast and intense. This new laser system satisfies both requirements, and does so with a relatively simple setup.

To get super-short bursts of laser light, you need to combine light waves of different frequencies in a very precise way such that they reinforce each other. This is easier said then done, particularly because it’s hard to get two different laser beams synchronized precisely. To overcome this, the researchers constructed a setup that runs a single laser beam through a beam splitter, producing two beams of different frequencies that are nonetheless the same beam. And because they share the same origin, they remain in sync.

But they’re still not at the attosecond level yet. Several other things have to happen to reach the proper intensities and durations necessary for attosecond-scale measurements. But a paper the team recently published in Nature Photonics outlines the road to attosecond resolutions in such a way that other researchers think its only a matter of time (and, more specifically, a matter of amplification) before we’re looking at individual electrons in a way in which we’ve never seen them before.