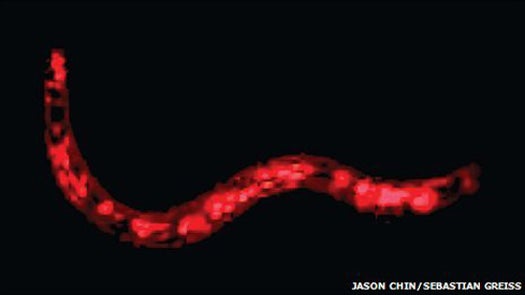 Researchers at Cambridge claim they’ve engineered the first animal with artificial information embedded in its genetic code in such a way that it generates biological molecules that have never been seen before in nature. That is, it churns out an amino acid that is wholly new, rather than one of the 20 found in natural living things.

A quick biology primer, just in case high school biology isn’t so fresh. DNA is of course the blueprint for all of our biological stuff. It gives instructions on how the amino acids should arrange themselves into proteins, which pick up the heavy lifting of life from there. There are just 20 amino acids, arranged in different combinations, that are encoded in the genome.

The Cambridge team has created nematode worms that generate a 21st, never before seen amino acid. That’s big, because it basically enables a new resolution in genetic manipulation, a kind of “atom-by-atom control” over biological molecules, as one biologist put it to the BBC.

The artificial protein produced by their artificially enhanced nematodes simply contains a fluorescent dye that glows red under UV light–a test to ensure that their genetic manipulation worked. But ostensibly scientists could do all kinds of things with this technique by producing all kinds of novel amino acids and proteins. Unlike an artificial recreation of something natural–something akin to the Venter Institute’s “synthetic life”–these nematodes represent that creation of something wholly new.

Keep an eye on this story. It’s bursting with potential for mind-blowing scientific innovation and chilling sci-fi screenplays.