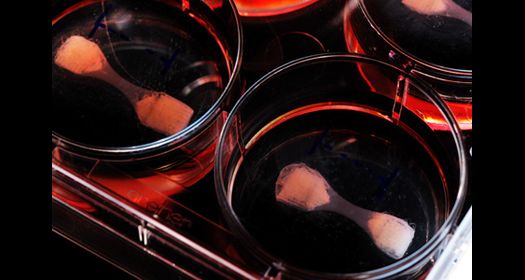 In 2009, we heard the wonderful news that scientists at Holland’s Eindhoven University of Technology had successfully grown pork in a petri dish: a giant step toward the dream of eating a pork chop without slaughtering a pig for it. Unfortunately, the lab-grown meat was floppy, “soggy,” and structureless, not at all what you’d like to toss on your grill and tuck into.

Now, scientists at the same university have figured out a way to get cultured muscle cells to have structure and strength.

Basically, you pull the muscle tight and attach each end of the tissue to a piece of Velcro, so as it grows it maintains its tense, stretched configuration.

As a result, the muscle cells are all aligned in one direction, which is a prerequisite for them to exert muscular force. Additionally, the muscle tissue grew its own intercellular blood vessels, without any encouragement, which has been another stumbling block among people trying to grow meat in vats.

Oddly, the press release about it refers to using the muscle tissue in restorative surgery, rather than in delicious meals.