In June, veterinarians at the Prague Zoo administered a check-up to Cassovia, a 550-pound female Przewalski’s horse, before moving her... 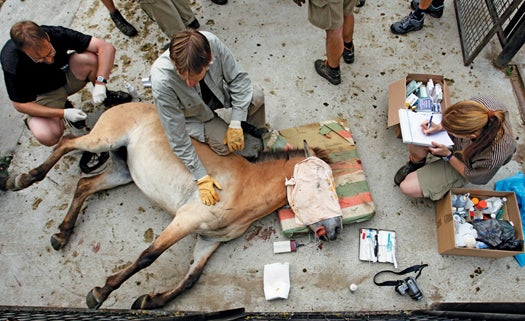 In June, veterinarians at the Prague Zoo administered a check-up to Cassovia, a 550-pound female Przewalski’s horse, before moving her to a new home on the Asian steppe. Natives of Mongolia, China, Russia and Eastern Europe, Przewalski’s (pronounced “shah-val-ski”) horses are the last wild horses left on Earth. Unlike the feral horse population of North America, the species has no domestic ancestors. Hunters and environmental pressures all but wiped out the animals by the 1970s, but about 1,500 remain in captivity. Conservation organizations have reintroduced another 400 into preserves in the steppe.

To prevent introduced horses from infecting a wild herd with contagious diseases, veterinarians test them for illnesses such as tuberculosis and vaccinate them against equine influenza. After their check-ups, Cassovia and three other Przewalski’s horses made a 52-hour, 4,000-mile journey by air and road to Mongolia, where they will join 24 other horses at the Khomiin Tal Reserve, a 965 squaremile nature preserve.