An increasingly pale six-member crew on a fake mission to Mars has just reached a new landmark: 438 days in... 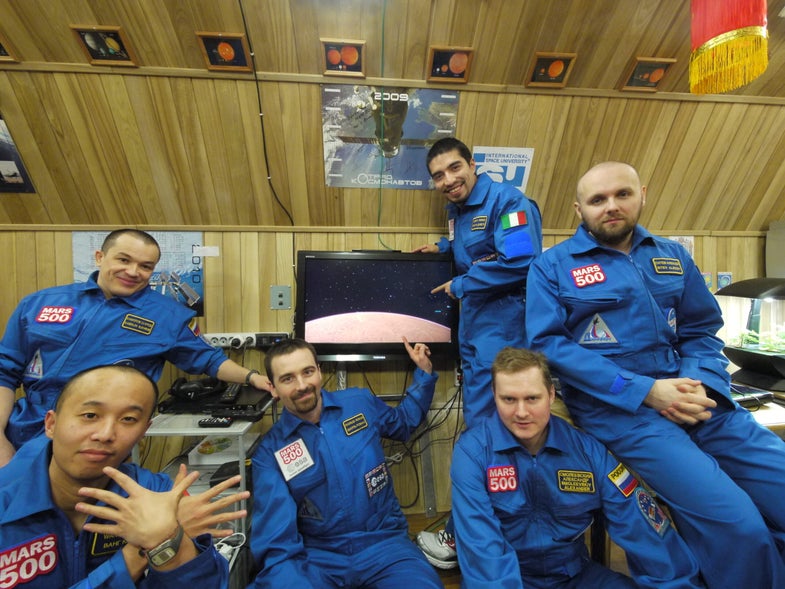 An increasingly pale six-member crew on a fake mission to Mars has just reached a new landmark: 438 days in isolation. The streak beats the record held by someone who actually spent that time in space, former Mir space station resident Valeri Polyakov.

The Mars500 crew is just a couple months away from returning to Earth after a simulated round trip to the Red Planet. In February, the crew “landed” on Mars and three crew members donned spacesuits, stepping out of their capsule for the first time in 250 days to walk on the fake Martian surface. The European Space Agency, which is sponsoring the experiment, said the crew is now enduring the most difficult part of the mission — several months of isolation in a cramped cabin with no Mars-walk to look forward to.

The point is to study the psychological and physical toll of long-distance space travel, to help prepare actual space crews that would need to spend more than a year cooped up in a spacecraft en route to Mars. If the Mars500 crew’s video and photo diaries are any indication, participants will turn kind of wacky as a coping mechanism.

The crew is living in a wood-paneled simulated space capsule in a Moscow parking lot, and is scheduled to “return” on Nov. 5. Each man is free to walk out at any time, but they’re all committed for the long haul, ESA said.