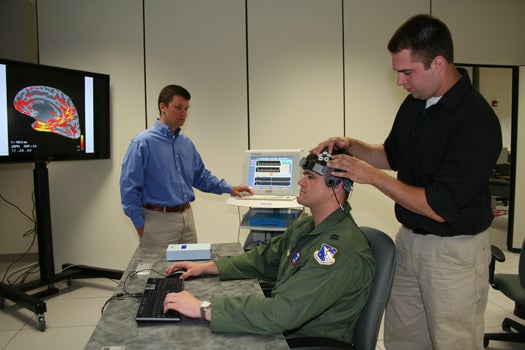 Walters is one of about 150 student interns who pass through the Human Performance Wing at the Air Force Research Lab every year. A state-of-the-art aircraft is only as good as the people controlling it, so students get such projects as simplifying the cockpit and control rooms by refining software interfaces and studying human vulnerability to directed-energy weapons. Within Walters’s Biosciences and Performance Division, interns analyze threats posed by nanoparticles, chemical weapons or plain old fatigue.

The helmet that Walters worked on directed small electrical currents to the brains of 20 airmen as they tried to spot planes on a collision course in a simulator. He and his adviser, biomedical engineer Andy McKinley, found that with the help of an electrical current, subjects maintained concentration at minute 40. Without stimulation, performance dropped drastically after just 20 minutes.