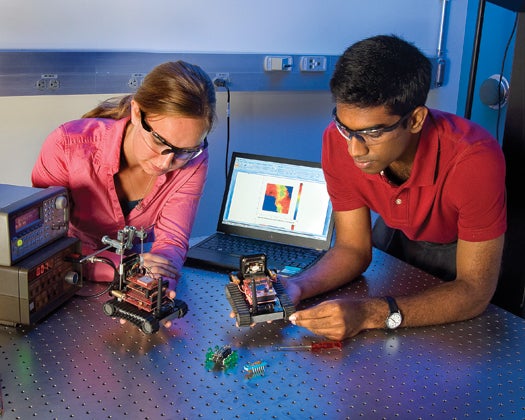 Some of the students interning on the Micro-autonomous Systems Technology (MAST) project at the Army Research Lab in Maryland spend their summer trying to equip soldiers with dozens or even hundreds of “insect” robots that can swarm into a bunker or cave to provide a remote look inside. “Working in silicon at the fruit-fly scale, they’ll cost almost nothing,” says Chris Kroninger, an aeronautics researcher specializing in MAST’s wings, “and they can be equipped with limited sensor capability that can be a first warning for a soldier.”

Kroninger says the robots won’t be deployed for another decade at least, and there’s plenty of work yet to be done. That’s true of most projects given to the 185 undergraduate students at the Army Research Lab every year. Whether they analyze body armor, develop new materials, or create miniaturized sensors, there’s more going on than they can possibly be part of.

“A lot of these kids come in with a deer-in-the-headlights look,” says 26-year-old researcher John Gerdes, who was an intern in 2006. “But the ARL does such a good job of balancing realistic expectations with the proper amount of mentoring and resources, it’s almost impossible not to succeed.”

Aaron Harrington came to the ARL as a University of Maryland sophomore and wound up spending two more summers there. “I didn’t know that research was something that you could go into,” says Harrington, who is now 24 years old and earning a master’s degree in aerospace engineering from his alma mater. In 2008, Kroninger assigned him to photograph wings flapping, which normal cameras will capture only as a blur. Using a strobe light to combat the blur and technique called photogrammetry, Harrington used two cameras recording video at 30 frames per second. “If you had two cameras and knew how far apart they were and had some idea of the distance from the test bay,” he says, “you could use triangulation to measure the distance. It turned out to be very accurate.