Build Your Own Spaceship at the Jet Propulsion Laboratory 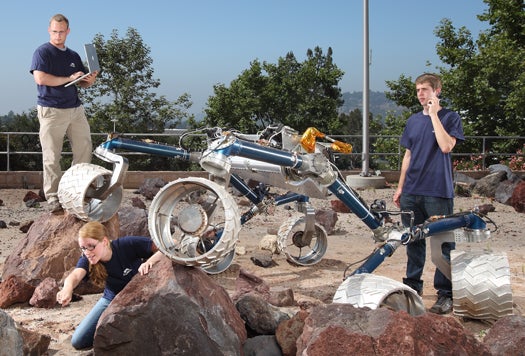 From the Explorer I satellite in 1958 to the new Mars Science Laboratory rover set to blast off at the end of the year, the Jet Propulsion Laboratory in Pasadena, California, has built the country’s most ambitious robotic space vessels. And every summer, about 280 undergraduates arrive there to participate in one of 16 internship programs for engineering or science students.

Cliff McKenzie, who is now 26, first set foot at JPL while studying at Wake Technical Community College and came back for an internship this year. The mechanical-engineering major, currently at North Carolina State University, helped design micro-spined feet for the Lemur IIb rover. The probe, which could explore Mars or an asteroid, needs the gripping mechanism to operate in low-gravity conditions.

“At first, the learning curve seemed almost too big to be able to accomplish anything in the few months I had here,” says Lukas Domm, a 21-year-old mechanical-engineering major from Dalhousie University in Nova Scotia. But soon he helped develop a new kind of drill that incorporates both a driving hammer force and rotational power in the same motion. “It could serve as a starting point for tools that retrieve samples on missions to extraterrestrial bodies,” he says, “because it’s relatively lightweight and requires low power.”