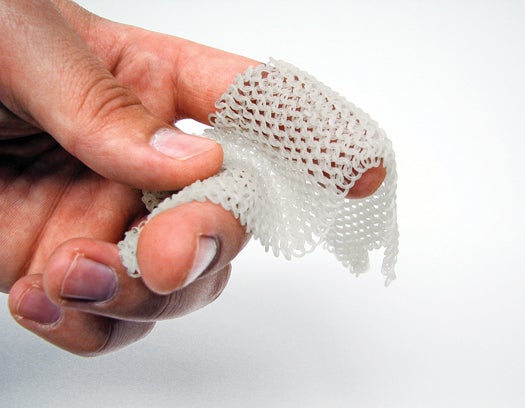 At the Creative Machines Lab, a division of Cornell’s department of mechanical engineering, 3-D printers fabricate everything from cupcake frosting to chain mail to body parts. Associate professor Hod Lipson, the head of the lab (who we’ve interviewed in the past), says “fabbing” particularly suits undergrads, because it takes only basic training in mechanical engineering to get involved, and the field rewards messing around. Cornell undergrads and master’s students designed a new open-source printer design, called Fab@Home, that anyone can build from blueprints online. And it was students in 2002 who developed a technique for bioprinting, which blends living human cells with inks. The potential breakthrough for reconstructive medicine is beginning to produce flesh, spinal discs and cartilage that could one day make their way into humans.

Jeffrey Lipton, a 23-year-old Ph.D. student who started working in the lab as an undergrad in 2008, began “playing around with the squiggles that come out of the printer.” He printed a variety of porous materials and went on to create a biological scaffolding that could eventually be used by surgeons. “You give them a scaffolding that’s temporary, and the cells grow into it and eventually replace it,” Lipton says. “They’re not prosthetics; they’re actual tissue.”