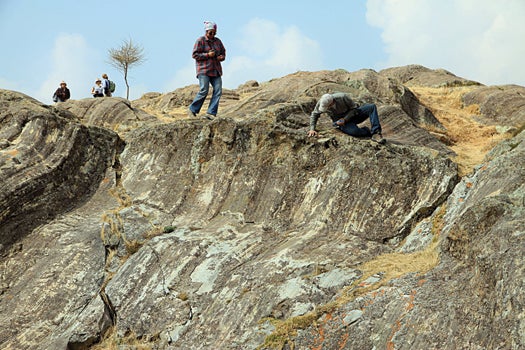 It’s been about 50 million years since the Indian tectonic plate began colliding with Asia, and the Tien Shan mountain range in Western China is still shaking. The region compresses horizontally at a rate of about a quarter-inch per year, pushing the mountains ever higher and resulting in frequent magnitude-6 and -7 earthquakes. In 2006, Caltech’s Division of Geological and Planetary Sciences (GPS) dispatched a 21-person team, mostly students, to a barren region near Urumqui to figure out how faults in the foothills increased their seismic activity.

Students of other scientific disciplines are usually stuck crunching data in a lab somewhere, but for about 20 majors in the Caltech GPS, life is much more adventurous. Last fall, students went to southern Peru to follow a line of 100 seismometers placed along the Nazca plate, which intersects the South America plate at the western edge of the continent and unleashes huge earthquakes, like the 8.8 monster that struck Chile last year.

Field experience, says 21-yearold Will Steinhardt, who graduated with a geophysics degree in June, is a crucial complement to data crunching: “If you’re just given data, you don’t have any intuition about why it looks the way it does.”