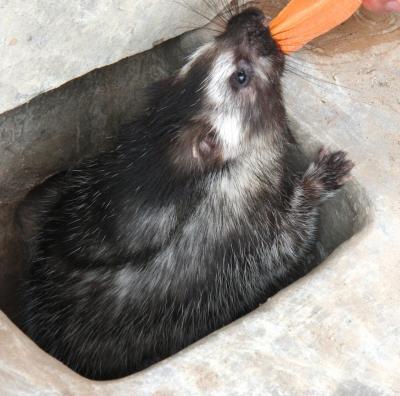 We love seeing animals using tools, from dolphins using sponges to scrape the seafloor, to octopuses that use coconut shells for protection. But animals using poison to their own advantage is another thing entirely. They’re learning all our tricks!

The African crested rat is the only known mammal to use a lethal plant toxin for its own defense, according to researchers in England, the US and Kenya. It chews up the bark of the Acokanthera tree, the same tree East African hunters use to make poison darts, and rubs the saliva on its flanks.

Researchers thought the rat itself was poisonous, because it displays a black and white coloration on its flanks (much like a skunk) when it’s threatened by a predator. Also, scientists have reported accounts of dogs getting sick and dying after coming into contact with the rats, which are also called maned rats.

But instead of producing poison itself, the rat grabs it from nature, researchers say. The hair on its flanks is perforated, helping it soak up the poisonous spit.

To test their theory, scientists from the Wildlife Conservation Society, the University of Oxford and the National Museum of Kenya tested a wild-caught rat. They gave it some branches and roots from the Acokanthera tree, and the rat proceeded to start gnawing the bark. Then it rubbed the saliva on itself.

The bark releases a compound called ouabain, which is used for poison arrows but also, oddly, to treat congestive heart failure, according to the Wildlife Conservation Society.

Researchers are still not sure how the rodent is able to chew up the poisonous material without getting sick itself. But it’s a pretty effective tool to protect the 2-pound rat from predators.