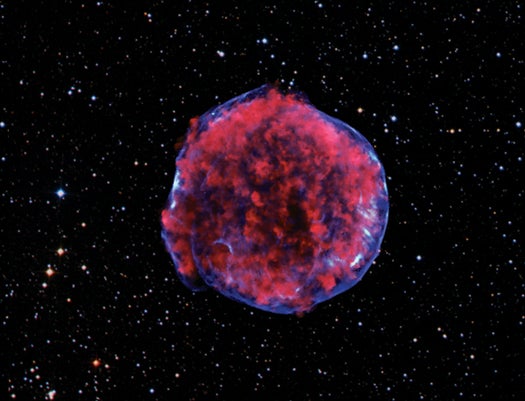 In March, astronomers at Rutgers University studying the supernova remnant Tycho revealed a surprise. Using the Chandra orbiting x-ray telescope, they found unexpectedly structured patterns within Tycho. Normally supernova remnants are chaotic, says Kristoffer Eriksen, who worked on the project. The scientists had anticipated a complicated network of holes and walls inside the royal-blue shock wave, but instead they saw regularly spaced light-blue stripes.

The presence of the stripes could be the closest thing to direct evidence that supernova remnants are able to produce cosmic rays, the origins of which are still poorly understood. Eriksen, along with his co-author Jack Hughes, would like to observe Tycho again in a few years to measure how far the stripes move.