Scientists Switch Social Behaviors On and Off in Mice, Shedding Light on Human Social Disorders

Just yesterday we learned that Caltech researchers can use pulses of light to toggle aggressive behaviors in the mouse brain.... 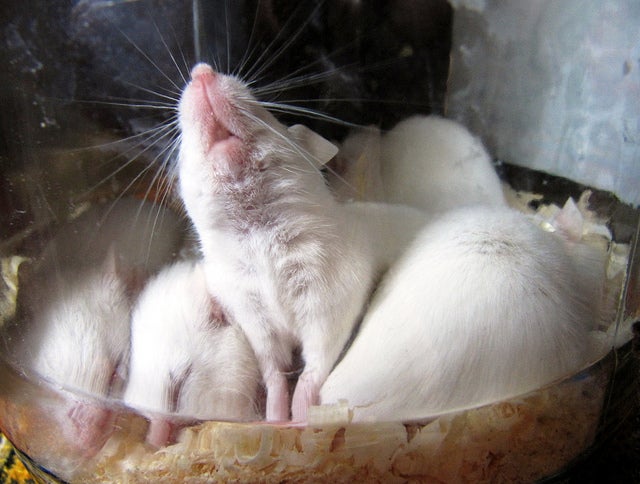 Just yesterday we learned that Caltech researchers can use pulses of light to toggle aggressive behaviors in the mouse brain. Today we learn that elsewhere on the West Coast scientists are turning social behaviors in mice on and off using the same method, and that could have big implications for social disorders like autism and schizophrenia in humans.

Using optogenetics–essentially, bioengineering different clusters of nerve cells to respond to certain frequencies of light–a team of Stanford researchers has found a way to test an established yet untested hypothesis about social dysfunction. This hypothesis holds that social-behavior deficits are linked to the propensity of excitatory nerve cells versus inhibitory nerve cells to fire.

That is, when facing social stimulus people with social disorders experience an imbalance wherein too many excitatory nerves fire (or not enough inhibitory nerves fire) resulting in a kind of over-responsiveness. This lines up nicely with empirical evidence (for instance, autistic people becoming agitated by loud noises or by too many people talking at the same time) as well as a certain anomalous brain-wave pattern known as gamma-oscillation that is detected in many people suffering from autism or schizophrenia.

In their mice, the researchers used optogenetics to bioengineer excitatory and inhibitory nerve cells in the parts of the brain responsible for social function to fire on command. That is, using different frequencies of light they could bias excitability. They then introduced them into social environments and tested them against a control group.

The researchers found that when they amped up the excitability in their optogenitically modified mice, the test subjects became almost instantly antisocial–and they also exhibited that heretofore inexplicable gamma-oscillation pattern in their brain waves. When the researchers restored balance by turning up the inhibitory nerve cell firing, the mice regained a significant amount of social function almost immediately.

Of course, this is significant because it might just get at the root of antisocial behavior brought on by social disorders like autism and schizophrenia. From a nervous system standpoint, mice and humans aren’t all that different (it’s thought that we shared a common ancestor some 75 million years ago). So these findings could be quite relevant to research into treatment for those suffering from schizophrenia and autism spectrum disorders.